Speaking at the Institute for Policy and Strategy Conference, former National Security Advisor Yaakov Amidror insisted Israel must develop the capability to destroy Iran’s military nuclear program on its own. 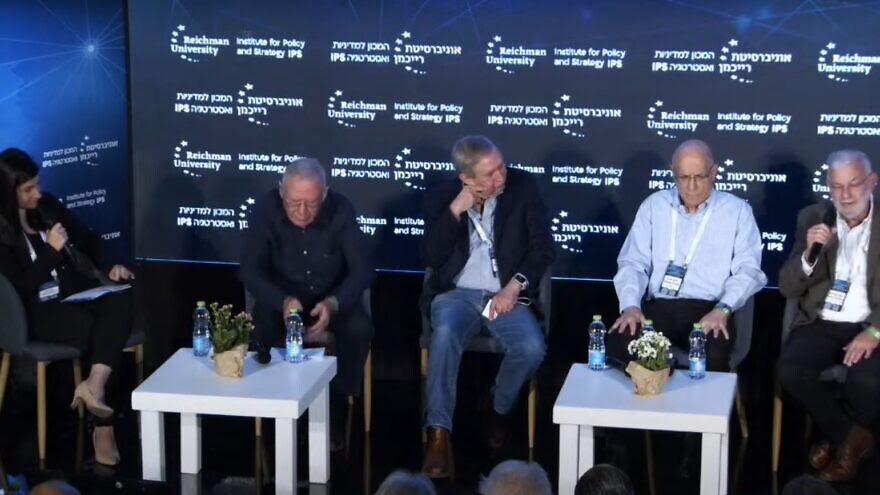 As world powers prepare to reconvene in Vienna for renewed nuclear talks with Iran, former Israeli National Security Advisor Yaakov Amidror said on Tuesday that “without a military threat and pressure on Iran, nothing will result from a deal.”

Amidror made his remarks as part of a panel discussion at Reichman University in Herzliya during the Institute for Policy and Strategy’s “Security and Policy” conference.

He fiercely defended the approach that Israel must develop its military capability to strike Iran alone.

“The Americans won’t carry out a single mission.”

Speaking on the same panel, former head of the Mossad Tamir Pardo said that Israel has “the best army in the world to deal with singular target attacks,” but warned that the situation surrounding Iran “is not the same.”

While Israel did succeed in singlehandedly halting nuclear programs in Iraq (1981) and Syria (2007), which involved one target each, “Iran involves tens of targets,” he said.

Brett McGurk, White House National Security Council coordinator for the Middle East and North Africa, who was interviewed online during an earlier session, said the U.S. “is fully committed to Israel’s security,” but was vague in answering exactly what America has in mind in terms of a military threat if the talks to return to the nuclear deal fail.

“As President Biden has said, we are prepared to pursue other options if diplomacy fails, but as of right now, we still remain very committed to the diplomatic course,” McGurk said.

“Nobody in the Biden administration has any illusions about Iran,” he added.

“Iran is not a friend. It is an adversary… Of course, de-escalation only works if you also have a deterrent capacity.

So, we are very committed to ensuring that all of our partners in the Middle East have the abilities to defend and protect themselves as they pursue avenues of de-escalation.”

He said that while the Trump administration held a maximalist position with regard to Iran, the Biden administration is working to “get back to basics” and focusing on “sound policy, sound statecraft.”

Joseph Votel, a former commander at the United States Central Command, told the conference, also via live feed, that “containing Iran’s adventurism in the region and preventing them from obtaining nuclear weapons is a national security interest for the United States.”

Votel stressed the U.S. is intent on “preventing instability in the region” and protecting Israel’s security.

He acknowledged Israel’s concerns about U.S. policy vis-a-vis Iran but insisted there are “enduring mutual interests.”

With regard to the military option against Iran, Votel said, “We will have to see how the negotiations play out and how we move forward in this particular area.”

“Being able to demonstrate and exercise military capability and our ability to return forces to the region is an important tool of leverage for our diplomats and our civilian leadership as we move forward,” he added.

“It is vital that we continue to do that.

We do have to routinely demonstrate our ability to bring people into the region [and demonstrate] that we can protect our interests.”

“As a military officer, I do believe there needs to be a way for us to have dialogue with our adversaries as we work through tense security issues.”

Amidror said that the nuclear deal “is great for the Iranians and if I were Iranian, I would do anything to return to the deal. It allows them to continue to develop parts of their nuclear program and by 2030 they receive complete legitimacy to do almost anything they want.”

While he said Israel must continue to try and reach a diplomatic solution because that is the best option, Amidror emphasized that he is “very pessimistic” and does not believe there will be a solution resulting from diplomatic efforts.

He noted that in 1995, Israel approached the U.S. with intelligence that Iran was developing nuclear weapons, but it took two years for the Americans to become convinced that the intelligence was accurate.

“And it’s not because they didn’t have the facts,” he said. “They had all the facts because we gave them the facts.

They refused to recognize the fact that Iran was developing a military nuclear program.”

“I mention this because it is part of our problem,” he said. According to Amidror, the U.S. now wants a smoking gun, but it will not recognize any evidence Israel provides as a smoking gun because the Americans simply do not have the will to launch a military operation against Iran.

Ultimately, Israel will need to take action on its own, he argued.

“I don’t know if we do or don’t have the capability [to strike Iran’s nuclear facilities] but if we don’t, we must.”

“The ability to defend ourselves is the entire purpose of the State of Israel,” he said, adding that the Jewish state exists exactly so that “we don’t need to travel to Washington and ask them to defend us.”

While former IDF intelligence chief Amos Yadlin and Pardo said it was a mistake for the U.S. to leave the JCPOA in 2018, Amidror disagreed and said it was the correct decision.

In his view, the mistake wasn’t in leaving, but in not having a “Plan B.”

In addition to this, Amidror noted that “to many Americans, Iran is not a problem.

The Americans regard human rights and the Palestinian issue far greater problems to deal with than the Iranian threat,” he said.

Amidror repeated his main point that Israel must be prepared to destroy Iran’s military nuclear facilities on its own. “I hope it doesn’t come to that, but unfortunately I believe in the end we will have no choice,” he said. “The Americans do not want to act.”