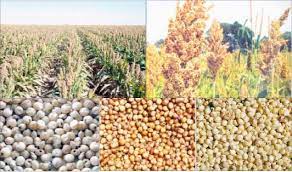 The Federal Government has called on research institutes to give priority and focus to the sorghum value chain as other agricultural produce.

The Minister of Agriculture and Rural Development, Dr Mohammad Abubakar,  made the call at the inauguration of technical working documents and debriefing of outcomes of socio-economic studies on Thursday in Abuja.

The inauguration is by the International, Crops Research Institute for the Semi-Arid Tropics (ICRISAT), Nigeria.

Abubakar said that sorghum should be given the same priority as other crops like cassava and rice.

“Why is sorghum not given the kind of priority like cassava and other crops are given?.

The time is now to do that.

”So I want the ministry to take note that sorghum is equally, in fact, a very important crop that should be given the same kind of attention.

” The bottom-line in agriculture is research, development, collaboration, implementation, monitoring and evaluation,” he said.

” However, more needs to be done, the potentials across crops, livestock, horticulture and fisheries sub-sectors are enormous.

” Government is determined to fill the gap and consolidate on the achievements recorded and focus on productivity enhancement, institutional realignment and private sector investment.

” Expectations are to deploy improved varieties and support agribusiness undertakings in the country,” he said.

Abubakar noted that the expectations in agriculture was to take Nigeria to the promised land and that could only be achieved when researchers are adaptive, focused to solving challenges and needs.

He also said that entrepreneurs should take deliberate actions to invest in the different agricultural value chains.

” The ministry, therefore, requires your contribution and support towards delivering in the above priorities areas, only then we will be able to address the impact of the global health emergency and high expectation of present administration in agriculture,” he said.

Dr Ernest Umakhihe, Permanent Secretary in the ministry, also said that the expectation to take agriculture to the promise would only be achieved when researchers were adoptive and focused “to solving our challenges.”

” It is gratifying to note the potentials in crops, livestock and fisheries sub-sectors that are very enormous.

” The prospects are to deploy improved varieties associated with technologies and support agribusiness undertakings in the country,” Umakhihe said.