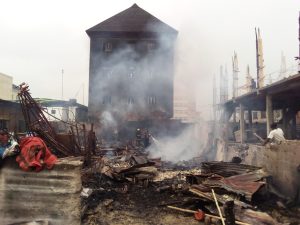 More than 15  hours after the fire outbreak at one of the biggest auto spare part warehouses in Ladipo, Mushin, Lagos State, firefighters have continued to struggle to rescue goods worth more than N500 million.

The newsmen report that the fire spread to the three-storey building at 11.00 p.m. on Sunday.

The building is located at No. 85, Ladipo St., Off Fatai Atere Road, Ladipo.

According to Farinloye, the building contained assorted Toyota spare parts.

“The fire was said to have started at a furniture workshop behind the building, with an electrical spark at 10:45 p.m.

“Neighbours claimed that they were not aware that the spark could lead to a fire.

“By the time they realised the fire outbreak, they could not handle it, and before responders could arrive, the fire had spread to the three-storey building.

“No casualty was recorded, and operations are ongoing,” Farinloye said.