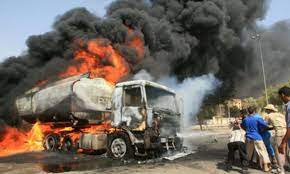 A mother and her child were burnt beyond recognition on Sunday at Lafenwa, Abeokuta when a petrol-laden tanker exploded and went up in flames.

Sector Commander of the Federal Road Safety Corps (FRSC) in Ogun State, Mr Ahmed Umar confirmed this to the newsmen in Abeokuta.

Umar said the tanker driver was maneuvering through bad portions of the road when the vehicle fell on its side.

He said also that the FRSC, the police, the Nigeria Security and Civil Defence Corps and the Fire Service were on the ground, adding that injured victims were taken to the hospital.

“The two deceased were burnt beyond recognition. An angry mob who threw stones at security agents at the scene also destroyed a Fire engine.

“The police were able to calm the situation and few of the hoodlums were arrested,’’ Umar said.

The spokesman of the state’s Traffic Compliance and Enforcement Corps, Mr Babatunde Akinbiyi, had earlier confirmed the incident to newsmen.

Akinbiyi said the tanker went up in flames because of the uncooperative attitude of people around the incident who were scooping fuel and engaging in other unwholesome acts which sparked the fire.

He said the tanker had an axle problem and overturned at about 4:45 a.m. while making its way around Lafenwa, spilling its content on the road.

He advised the general public to vacate the area, saying that TRACE, the police, the FRSC and the Fire Service were all on ground to put the situation under control.

Newsmen report that several shops in the area were also destroyed by the fire.