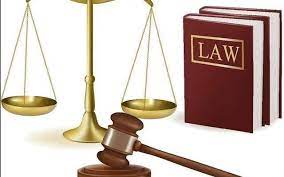 Two men were on Thursday docked in an Iyaganku Magistrates’ Court in Oyo for allegedly stealing a railway signal pole.

The police charged Idowu Ganiyu, 26, and Audu Babale,18 with three counts of conspiracy, vandalism and theft.

The Prosecution Counsel, Insp Olufemi  Omilana told the court that Ganiyu and Babale on Nov. 25, at about 8, destroyed the signal pole at the Nigeria Railway Corporation (NRC) Line, Jericho area, Ibadan.

He said that the defendants stole the signal pole worth N450,000, property of the NRC.

The Magistrate, Mrs T. B. Oyekanmi granted them bail in the sum of N100, 000 each with two sureties each in like sum.

Oyekanmi ordered that one of the sureties must be a relation of the defendants.

The magistrate and adjourned the matter until Jan. 20 for hearing.

In another development, the National Drug Law Enforcement Agency (NDLEA), Edo Command, says it has seized 5,492 Kilogrammes of substance suspected to be cannabis Sativa within two days in the state.

Mr. Buba Wakawa, state Commander of the agency, disclosed this in an interview with newsmen Benin on Thursday.

Wakawa said that the seizures were made from two concealed warehouses discovered by the personnel of the command in two communities across two Local Government Areas of the state.

He explained that on Nov. 23, acting on credible intelligence, personnel of the agency stormed a storage facility at Uzzeba in Owas West Local Government Area in the state and evacuated 107 bags of suspected Cannabis Sativa weighing 1,240 Kilogrammes, (1.240 tonnes)

“Then on Nov. 24, the command discovered another concealed warehouse at Uhiere village in Ovia North East Local Government Area.

“The command’s personnel went into action immediately and a total of 315 bags of suspected cannabis Sativa weighing 4,252 Kilogrammes (4.252 tonnes) were evacuated and removed from circulation from a concealed warehouse”.

He added that a 21 years old suspect was arrested during the operations.

He disclosed that the two seizures were a major seizure by the command in November, as the quantity of suspected cannabis sativa were huge.

He added that there were other seizures made in November, which when added brings the total seizure made within the month to 6,477.86 Kilogrammes.

The commander further disclosed that within the month under review, 22 suspects comprising 18 males and four females were arrested in connection with drug trafficking.

“The command however within the period secured 10 convictions, while nine drug cases were filed at the Federal High Court, Benin.

“We also counselled 13 drug abuse clients within the period”, he said.

“The above two huge seizures are testimonies to the CCEO’s vision for the state and the country in general.”