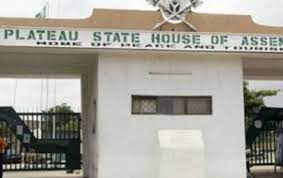 The Plateau State House of Assembly (PLHA) presided over by the Speaker, Yakubu Sanda, on Thursday passed into law an appropriation bill of N116. 7 billion for the 2022 fiscal year.

The appropriation bill as passed by the lawmakers is N10 billion higher than the figure of N106.8 billion submitted to the House by Gov. Simon Lalong.

Mr Yahaha Adamu, House Committee Chairman on Appropriation during plenary, said that the increment was necessitated by needs presented by ministries, departments and agencies during the budget defence.

The house among many recommendations urged the governor to sponsor a bill seeking the alteration of the law establishing the College of Arts, Science and Remedial Studies Kurgwi.

The chairman said that the bill would help change the name of the school to that of a Polytechnic, to enable it to benefit from Tertiary Education Trust Fund (TETFund).

The House Majority Leader, Mr Daniel Nanlong during the plenary moved a motion for a matter of urgent public importance on the breach of security on Sunday at Jos custodial centre of the Nigeria Correctional Service.

Naanlong expressed concern that in spite of the high powered security formations within and around the centre, the attackers still succeeded.

He expressed fear that the escapees posed a great danger to society especially the hardened criminals among them.

The house also received a committee report of the Plateau State Land Administration Bill 2020 as read by Chairman House Committee on Land, Survey and Town Planning which subsequently passed the third reading.

Appropriation Committee report on the request for virement of funds from heads of five ministries for the takeover and completion of the Inland Container Depot at Heipang-Jos, Plateau from the 2021 Budget was also received.

The newsmen report that it was the first plenary attended by members from two divides that emerged after the impeachment of the former speaker, Abok Ayuba.