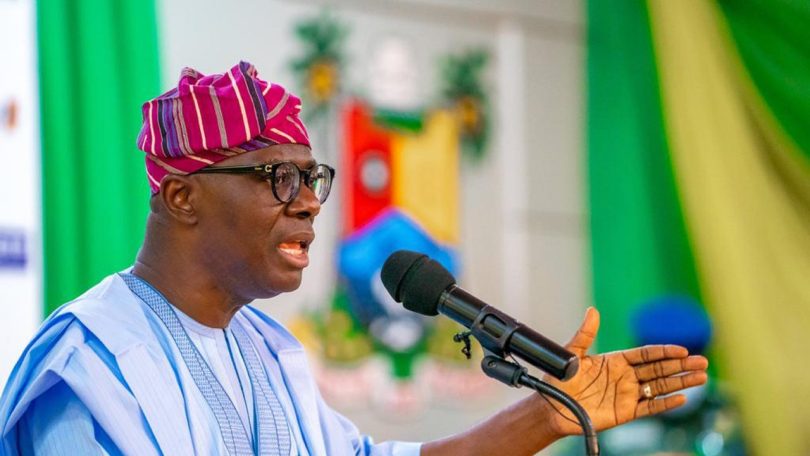 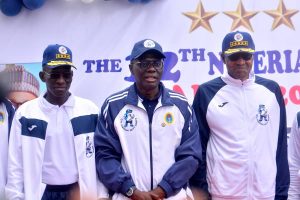 Gov. Babajide Sanwo-Olu of Lagos State and the Chief of Naval Staff (CNS), Vice Adm. Awwal Gambo, on Thursday, charged athletes participating in the 12th Nigerian Navy Games to display the full spirit of sportsmanship and fair play during the competition.

They gave their advice at the opening ceremony of the 2022 edition of the Nigerian Navy Games on Thursday in Lagos.

The event is scheduled for between Sept.8 and  Sept.13 at the newly inaugurated Ultramodern Sports Complex in Navy Town, Lagos State.

The governor in his address said that no fewer than 1,800 naval sports personnel and officials would take part in several events across multiple venues during which the athletes would be expected to compete for laurels to the glory of the Nigerian Navy.

“The commitment of the Nigerian Navy and the Nigerian  Armed Forces as a whole to the progression and development of sports is indeed inspiring, encouraging and commendable.

“The role of sports and sporting engagement in societal development cannot be overemphasized.

“I, therefore, charge all participants to bring to this event the full spirit of sportsmanship and I congratulate all the would-be winners to put in their very best,” Sanwo-Olu said.

The governor said that sporting event was not only a source of recreation and entertainment but had also been proven to promote mental and physical well-being for participants.

“Sports also brings people together and creates among them a sense of camaraderie which boosts workplace morale and inspires athletes to push themselves beyond their ordinary limits.

“The world-class sports complex just commissioned proves the fact that it provides an ambiance and opportunities for the development of new generations of Nigerian sporting talents.

“Someday soon, we will be able to look back and connect the stories of emerging Nigerian world champions to this complex,” he said.

According to Sanwo-Olu, the opportunities that an impressive sports complex provides will certainly improve investments and output for the Nigerian Navy.

He thanked President Muhammadu Buhari for the approval granted to the Nigerian Navy to establish a new Forward Operating Base (FOB) within the Lekki axis.

“The Nigerian Navy, therefore, is an important partner to us in ensuring the security of lives and properties of the residents of Lagos.

“We will never take this partnership and support for granted.

We will continue to look for ways to deepen our relationship with the Nigerian Armed Forces for the peace, security and progress of our people,” Sanwo-Olu said.

According to Gambo, Ibas planned on inviting the President to commission the complex at the end of 2020, however, this did not hold due to restrictions imposed by the COVID-19 pandemic.

“So, hosting the Games at a time like this amidst resource constraints displays the navy’s resolve to enhance the fitness of naval personnel and the capacity to tackle prevailing security challenges.

“Accordingly, physical fitness and mental alertness of personnel have become key considerations for the armed force to meet increasing demands of its current operational environment.

The CNS said that the ultra-modern edifice, which was the first of its kind, was equipped with modern indoor sporting equipment and a world-class gymnasium.

“Additionally, the complex has a swimming pool and a standard football pitch as well as tracks for athletics events.

“The goal is to encourage personnel to continue to strive toward remaining fit at all times while developing the team spirit which is synonymous with the Nigerian Navy as encapsulated in the motto, ‘Onward Together,’” he said.

Gambo said that sports were important to the naval personnel and that the Nigerian Navy had recorded significant appearances at local and international competitions in part years.

He said that the Nigerian Navy Volley Ball Team (CNS Spikers) registered its arrival into the Nigerian Volley Ball circle in March by dominating the male category in the championship organized by the Volley Ball Federation of Nigeria. 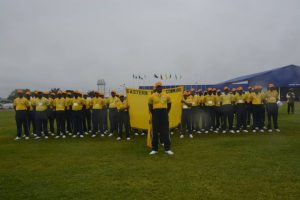 “Out of 37 volleyball teams, made up of 21 male and 16 female teams, the CNS Spikers had an unbeaten record and won the championship, while the female team won the silver medal.

“These outstanding performances positioned the teams and earned the female team a slot to represent the country at the African Women Volleyball Club Championship.

“This is the first time after 38 years that a military team will be representing Nigeria at an international competition,” the CNS said.

Gambo said that the Nigerian Navy Polo Team also made its maiden appearance at the Port Harcourt International Polo tournament in January and won the TY Danjuma Cup.

“Furthermore, at the Lagos International Polo Tournament that took place at the Ikoyi Polo Club in February, the Nigerian Navy Polo Team came second in the Silver Cup Category.

“Also, the Nigerian Navy Sailing Team represented the country at the Academies Sailing Regatta in Italy in April and returned with the Best Behaved and Spirit of Sportsmanship Award.

“Similarly, several other naval personnel both serving and retired have distinguished themselves in diverse national and international sporting competitions,” he said.

The CNS said that he was optimistic that more talented personnel would emerge from this competition who would make the Nigerian Navy and the nation proud in future national and international competitions.

“While anticipating brilliant performances, let me encourage all participating athletes to exhibit fair play and healthy rivalry as they compete for medals,” Gambo said.