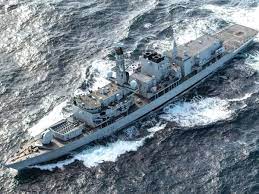 A British warship was hit by a Russian submarine while on patrol in the North Atlantic Ocean last year, British officials said.

The Royal Navy’s HMS Northumberland had been searching for the submarine after it disappeared from the ship’s radar in the Arctic Circle shortly before the incident took place.

The submarine hit the warship’s sonar a piece of equipment being towed hundreds of metres behind it, which was fitted with sensitive hydrophones for listening underwater.

The incident, which happened in late 2020, was captured by a documentary crew from Britain’s Channel 5 who were filming a television series called “Warship: Life at Sea.’’

Britain’s Ministry of Defence has since confirmed the collision between the submarine and the warship, with a UK defence force source telling the BBC that it was not thought to have been deliberate.

The collision reportedly caused damage to HMS Northumberland’s sonar, with the ship returning to a port in Scotland to replace the damaged equipment.

The Defence Ministry, which does not usually comment on operations, was forced to do so on this occasion because the incident was caught on camera.

A spokesman said: “In late 2020 a Russian submarine being tracked by HMS Northumberland came into contact with her towed array sonar.

“The Royal Navy regularly tracks foreign ships and submarines in order to ensure the defence of the United Kingdom.’’