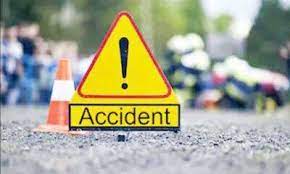 A  speedy truck driver on Friday killed a female passenger in a tricycle at Ufuma, on Ekwulobia-Ufuma Road in Aguata Local Government Area of Anambra.

Mr. Adeoye Irelewuyi, the Sector Commander of the Federal Road Safety Corps (FRSC) in Anambra confirmed the incident to the newsmen in Awka.

Irelewuyi said the accident, which occurred at about  2:30.p.m. was caused by excessive speed and loss of control.

“Eyewitness reports indicate that the driver of the truck was on top speed, he lost control of the vehicle, rammed into the tricycle and crashed.

The victims were taken to  Queenies Hospital, Ufuma where one female adult, who was a passenger in the tricycle was confirmed dead by the doctor on duty.

“Her body was consequently deposited at the Ajali Mortuary by the FRSC rescue team, “he said.

The sector commander added that the vehicles and the driver of the truck were later handed over to men of the  Ajali Police Division.

He condoled with the family of the dead victim and warned motorists to desist from speeding, as well as keep to road safety instructions.

In another development, the Federal Road Safety Corps (FRSC) said on Friday that 1,263 Road Traffic Crashes were recorded in the Federal Capital Territory (FCT) and Niger in 2021.

The Zonal Commander, FCT and Niger, Mr. Jonas Agwu, told newsmen in Abuja that 445 deaths were recorded and 3,032 people sustained various degrees of injuries within the period under review.

Agwu identified speed and wrong overtaking as the major cause of the accidents, adding that speeding remained the number source of worry for corps personnel in road safety management.

He said that the corps would do its best to ensure that accidents resulting from speeding to the barest minimum in 2022.

He said that Mokwa-Jebba road in Niger was one of the most dangerous corridors in the territory under the command..

“Crash trends show that speed remains a concern to the corps.

Our enforcement of speed limiters led to the arrests of 5,006 motorists for violating road traffic rules.

“Also, 1,092 were cautioned on speeding. If we continue with our enforcement we should be able to address this fully,” he said.

Agwu said that the corps would continue to monitor road usage to guard against dangerous driving, among other causes of accidents.

He appealed to the public to toll-free numbers during emergencies to get quick and prompt responses from the FRSC.

Also speaking, the Sector Commander, FCT Command, Mr. Oga Ochi, said that the command recorded 964 crashes in 2021 while 189 people were killed in accidents in FCT.

Ochi said that 4,897 people were involved in road traffic accidents with 1,914 injured.