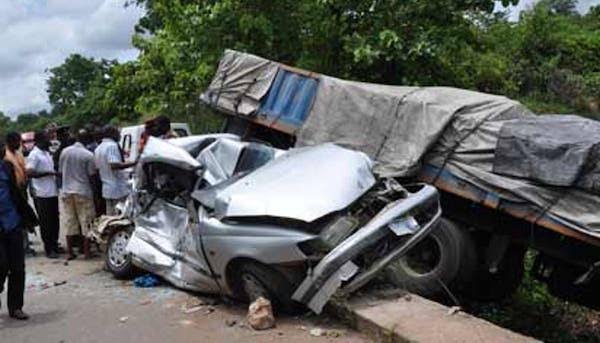 The Sector  Commander, Federal Road Safety Corps (FRSC) in Bauchi, Yusuf Abdullahi, says no fewer than eight persons lost their lives in a second road crash recorded on Thursday in the state.

The Sector Commander, Mr. Yusuf Abdullahi, confirmed the incident to the newsmen, on Friday in Bauchi.

Newsmen report that the accident occurred barely 11 hours after seven persons lost their lives and two others were injured in a ghastly auto crash on Bauchi-Jos Road.

Abdullahi said that four others sustained various degrees of injuries in the accident which occurred in Kafin Liman village along the Bauchi-Kano road around 11:30 p.m.

The Commander said that the personnel of the Corps cleared the crash scene and attributed the accident to road obstruction and over speeding.

“Eight died on the spot, they included five males and three females.

“The truck broke down and not properly parked which is an obstruction on the road and the other vehicles ran into it due to recklessness,” he said.

He said the injured persons had been referred to the Kafin Madaki General Hospital for treatment while the corpses were deposited at the morgue in the same facility.

The Commander advised motorists to observe traffic rules and regulations to check road carnage in the state.

In the same vein, six persons died in an auto crash that occurred on Offa-Ajase Ipo road, the Federal Road Safety Corps (FRSC) has confirmed.

The Kwara Sector Commander, Jonathan Owoade, told the newsmen on Thursday that the fatal crash occurred at Falokun.

He said that items recovered at the crash site had been handed over to the Police and the obstruction caused by the accident cleared.

“This afternoon the RS8.14, Offa Unit Command received a distress call of a crash which occurred at a location called Falokun on Offa-Ajase Ipo road.

“It was a fatal crash involving two private vehicles and eight persons were involved.

“Sadly six persons lost their lives while two others had fractures and bruises.

“The injured persons have been taken to General Hospital Offa while the corpses have also been deposited at the morgue in the same facility,’’ Owoade said.

According to him, we can only plead with motorists to avoid speeding and be cautious when driving.

“Among the casualties today were children.

“We are pleading once again; be patient while driving. If you are too much in a hurry to reach your destination, you may never get there, drive safely,” Owoade said.