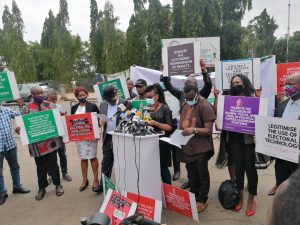 A coalition of 14 Civil Society Organisations (CSOs) has expressed concern over delay in the passage of the Electoral Act Amendment Bill, urging the National Assembly to fast track its passage.

Spokesperson for the coalition, Ms Cynthia Mbamalu, said this when she spoke with newsmen on Tuesday in Abuja.
Mbamalu, also Programmes Director, Yiaga Africa, said that reforming the electoral legal framework for credible elections was a top priority, urging the National Assembly to ensure that the bill was passed in the shortest possible time.

She said that in December 2020, the National Assembly held a public hearing on the Bill which provided an opportunity for citizens and stakeholders to participate and make their inputes to the electoral reform process.

“The urgent need for reforming the Electoral Legal Framework is founded on the broad-based consensus by Nigerian citizens’ and electoral stakeholders on the need for a more credible and improved electoral process.

“A process that will encourage active citizens’ participation and guarantee their rights in electing leaders and representatives that will provide good governance by addressing gaps in the current electoral legal framework.

“The Senate President at that time promised Nigerians a new Electoral Act by March 2021. That timeline has come and gone!!!

“Election remain the fulcrum and constant cardinal feature in a democracy; It is important to protect all conditions and instruments required to conduct free, fair and credible election to ensure that the sovereign will of the people prevail always,‘’ Mbamalu said.

Also read: We will not play politics with matters of life, wellbeing of Nigerians – APC

She said that the seeming lack of progress at the National Assembly on the Electoral Act Amendment bill was worrisome.

She said that Nigerians demanded that their elected representatives responded to the urgent need for an electoral legal framework that would genuinely strengthened the electoral processes and procedures, promoting inclusivity and addressing impunity.

She added that the continued delay in the process was reminiscent of the failed process in 2018 and attendant impact on the 2019 general election.

Chief Executive Officer, The Albino Foundation, Jack Epelle said that in considering the Bill, the National Assembly should undertake an in-depth consideration of the citizens’ priority issues, to address identified gaps in the current electoral legal framework.

Epelle said that the priority issues included strengthening the financial and operational independence of the Independent National Electoral Commission (INEC).

He said that they also included publication of polling unit level results by INEC to promote transparency in the result collation and transmission process and protecting the voting rights of the blind and visually impaired voters.

He added that they included reducing the cost of nomination of candidates to promote a level playing field for all contestants and promoting the inclusion of women, youth, and persons with disability in politics.

Epelle said that other priority issues included legitimising the use of technology in the electoral process with particular emphasis on the biometric voter register, biometric accreditation of voters; electronic voting, electronic collation and transmission of results.

He said that others included ending impunity for electoral offences by the establishment of the Electoral Offences Commission and Tribunal.

He added that improving election security and promote professionalisation and non-partisanship in the conduct and behaviour of security personnel on election duty and introduction of early/special voting for Nigerians on essential election duty was part of it.

Epelle said that eliminating the impact of judicial actions on citizens will and choices in elections was the final priority issue.

Mr Ezenwa Nwagwu , Executive Director, Peering Advocacy and Advancement Centre in Africa (PAACA)said that the demands of the group were germane aspirations of Nigerians.

“Together with Nigerians, we firmly believe that if the current electoral legal framework is not reviewed and reformed, it will have negative impact and consequences for democratic consolidation.

“The NASS must recognise that passing the Electoral Bill in good time will engender expeditious action by the executive, ‘’ he said.

Nwagwu said that the speedy passage of the Bill would give INEC the legal clarity to adequately plan and efficiently conduct future elections, particularly the Nov. 6 Anambra governorship election.

“Consequently, we join our voices with millions of Nigerians to call on the National Assembly to speed up the process for the passage of the Electoral Act Amendment Bill.

“In the same vein, we call on the President to speedily assent to the bill and deliver a brand-new Electoral Act 2021 to Nigerians ahead of the 2021 democracy day celebration on June 12,’’ he said.

Nwagwu said that the group remained hopeful that its collective commitment and partnership would further translate to the passage of the Electoral Act Amendment Bill that would work for all Nigerians.

“We remain resolute in our demand to the leadership of the 9th Assembly to ensure it writes its name in gold by delivering to Nigerians a new Electoral Act that prioritises citizens’ demands.’’