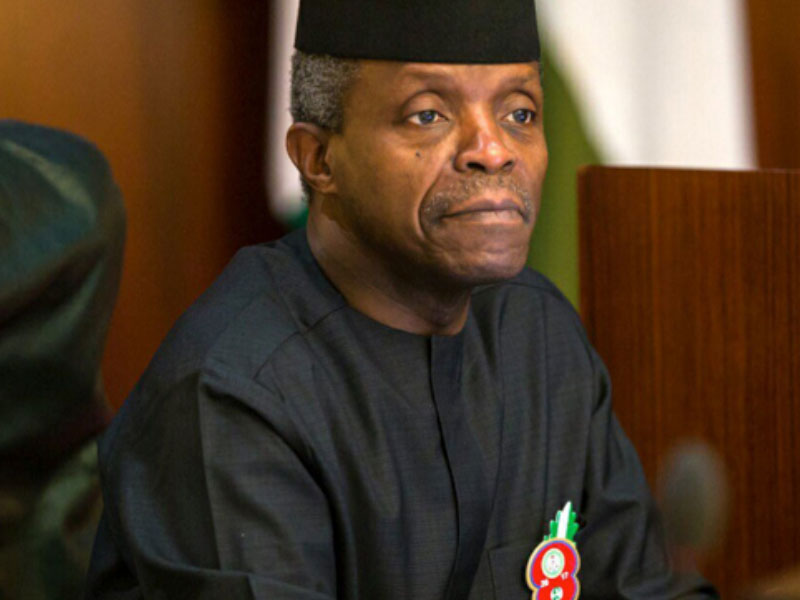 Vice President Yemi Osinbajo on Thursday picked his All Progressives Congress (APC) Expression of Interest and Nomination forms for the 2023 presidential election.

The newsmen report that Sen. Kabiru Gaya, Chairman of the umbrella body for Yemi Osinbajo Support Groups, The Progressives Project (TPP) led a team to pick the form for Osinbajo in Abuja.

Speaking with newsmen shortly, Gaya described Osinbajo as the right man for the job.

“I believe politics is a game of giving and take.

President Muhammadu Buhari has served this country for eight years.

“Therefore the presidency should go to the South and that is why we said the best person to handle this matter is somebody who has been in the system.

“If he’s sworn in today at the Eagles square as president of the country, by tomorrow morning he can pick up because he is already in the system.

“I was a governor I know what it takes when you are sworn in it takes time for you to learn and move forward, but when you are in the system, you don’t have that problem,” he said.

He expressed optimism that with Osinbajo as the country’s president in 2023, there would be an improvement in the country’s economy and security.

According to Gaya, Osinbajo will work on the existing plan to improve and develop the economy and make Nigeria better for all.

He added that Osinbajo would abide by the decision on the party on the mode of the primary election for the presidential ticket.

Gaya expressed confidence that Osinbajo would emerged the APC flag bearer in spite of the numerous aspirants in the race.

About 15 aspirants have so far joined the presidential race on the platform of APC including Asiwaju Bola Tinubu, the APC national leader,  Mr  Rotimi Amaechi, the Minister of Transportation and Sen. Rochas Okorocha.

Others were Mr Adams Oshiomhole, a former National Chairman of the APC, Gov. Kayode Fayemi of Ekiti state and Sen. Godswill Akpabio, former Minister of Niger Delta Affairs among others.

Addressing newsmen on Thursday in Abuja after paying for the Expression of Interest and Nomination forms, Bakare said he would change the country’s narrative by enthroning good governance if elected president.

Bakare said that he believed in God for the right leadership for Nigeria.

“I trust God helping us with men of goodwill, East, West, North and South of the country and across party lines, male and female we will rise and rebuild our nation.

“This will be in such a way that the devastation we are experiencing, we would see it no more.

“Our programme is very simple: peace, prosperity, progress and possibilities.

Upon those four pillars, Nigeria will be rebuilt and the hope of many citizens will be rekindled.

“We are all going to join hands to make it happen.

No other nation will fix our nation for us,’’ Bakare said.

He added that it would take Nigerians from all walks of life, within and in the Diaspora to join hands together to build the country in the interest of all.

He spoke on his views on the array of aspirants in the 2023 presidential race and the possibility of the presidency shifting to the South.

He said God rules in the affairs of men and He gives power to whoever He wills.

“We trust God that the best, the fittest and the most competent will emerge and the one who truly loves our people, especially the poor will rise to fix our nation,’’ the pastor-politician said.

“There is only one seat.

Whoever wins, the rest of us must rise to support him to rebuild Nigeria, East, West, North or South, Nigeria is our country,’’ he stressed.

The newsmen report that Bakare was President Muhammad Buhari’s Vice-Presidential candidate in 2011 on the platform of the defunct Congress for Progressive Change.

More than 10 aspirants have so far joined the APC presidential race.

Others are Gov. Yahaya Bello of Kogi, Dr Chris Ngige, the Minister of Labour and Productivity, Mr Chukwuemeka Nwajuba, the Minister of State for Education, Gov. David Umuahi of Ebonyi, and Sen. Ken Nnamani.

The APC special presidential primary convention is scheduled to hold from Monday, May 30 to Wednesday, June 1.