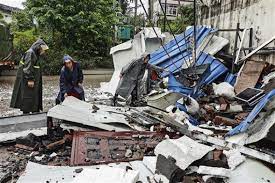 At least three people were killed and 60 injured in an earthquake in south-western China, state media reported on Thursday.

The quake’s magnitude was measured at 6.0 and its epicentre was in Luxian County in Sichuan Province.

The People’s Daily reported that 737 houses collapsed and more than 7,000 buildings were damaged.

There were also reports of power outages as rescue work continued.

The west of China is regularly hit by earthquakes.