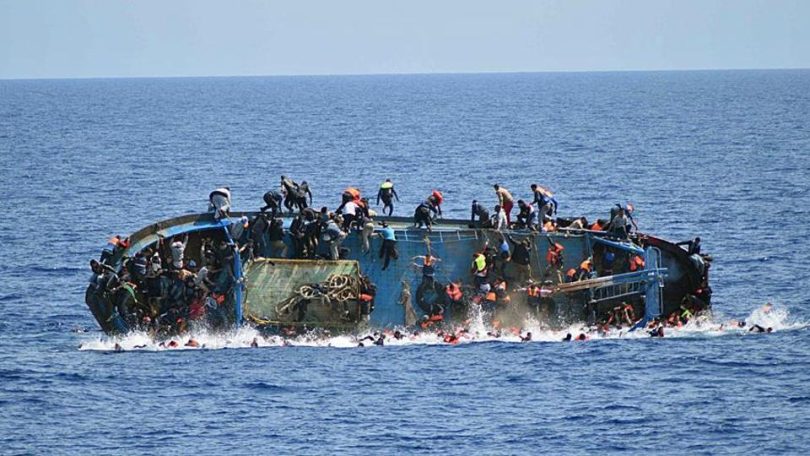 … As Police present suspects on alleged ritual killings, others in Niger***

The Libyan Navy on Tuesday said that four bodies of illegal migrants were recovered and 3 others were missing when a boat capsized off the country’s western coast.

The Libyan navy in a statement said “a boat carrying illegal migrants capsized yesterday off the coast of Mellitah town. in Western Libya.’’

“A coast guard patrol rescued 17 illegal migrants and recovered four bodies, while three others remain missing, as they were on their way to Europe,’’ the navy said.

The Illegal Migration Control Department will look after the rescued migrants and prepare to deport them to their countries, it added.

Libya has been suffering insecurity and chaos since the fall of the late leader Muammar Gaddafi in 2011, making the North African country a preferred point of departure for illegal migrants, who want to cross the Mediterranean Sea to European shores.

According to the International Organisation for Migration (IOM), so far in 2022, a total of 6,340 illegal migrants were rescued and returned to Libya, including 510 women and 273 minors.

The organization added that in 2021, a total of 32,425 illegal migrants were rescued and returned to Libya, while 662 died and 891 others went missing off the Libyan coast on the central Mediterranean route.

In another development, the police command in Niger on Tuesday presented seven suspects for alleged culpable homicide and other crimes committed in different parts of the state.

DSP Wasiu Abiodun, the command’s Public Relations Officer, announced this while presenting the suspects to newsmen at the command’s headquarters in Minna.

Abiodun said that on May 19, one Hussaini Ibrahim, 4, of Angwan Hausawa area of Lapai, was reported missing and on May 20, information was received that one Mubarak Yunusa of Magaji primary school area was sighted with a sack moving toward a stream in the area.

He said that following the information, the police operatives attached to Lapai Division arrested the said Mubarak Yunusa.

“During interrogation, the suspect confessed that he dumped a body, packaged in a sack in a river within Lapai area and that the sack was given to him by his shop landlord one Emanuel Okuagba, 43, who resides in Lapai.

“Mubarak led a team of policemen to the river where a decomposed body of the missing boy, concealed in a bag was recovered and taken to General Hospital, Lapai for autopsy,” he said.

He also said that on May 21, the police operatives attached to Chanchaga Division arrested one Lawal Abubakar, 16, of Kasuwan-Gwari, Minna.

“The suspect was arrested at Chanchaga cemetery when he attempted to exhume a body.

“During interrogation, he confessed to have conspired with one Salisu of the same address, presently at large to get body parts and cloth of a body from the cemetery for N5,000.

“He equally engaged in a similar act in last year at Bosso cemetery where he exhumed and removed four fingers of a body. He confessed further that he was sent by one Sadiq to get the fingers and was paid N3,000,” he alleged.

Abiodun said that based on a tip-off, five suspected syndicates of job scammers were sighted at a hotel in Minna, documenting some applicants for replacement in an establishment.

“On the receipt of this information, police operatives attached to the Intelligence Unit of the command took action and arrested the five suspects.

“During interrogation, Patience confessed that she had contacted more than 10 unsuspecting public since 2020 for a job replacement offer with a payment of N500,000 each person”, he said.

Patience confessed that each of the victims made half payment and to pay the balance after issuing them with an appointment letter.

“However, she claimed to have arranged fake documentation for the victims as one of them was worrying him for the next stage of the job placement.

“In the course of the investigation, more than 50 victims have been discovered to have fallen into this act of job racketeering.

“The public is advised to be wary of job scammers of this nature and avoid desperation in the name of seeking for employment,” he said.

He also said that all the suspects would be charged to court after investigations.