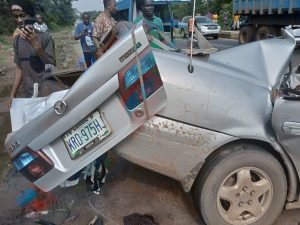 …One dies, 10 injured in another Abeokuta -Sagamu expressway auto crash***

Five persons have been confirmed dead on Saturday while three others sustained injuries, in an accident in Ogun.

The crash involved a Howo Sino truck and a Mazda car, at Day Waterman junction on the Abeokuta – Sagamu expressway.

Mr. Babatunde Akinbiyi, the Spokesperson, of Ogun Traffic Compliance and Enforcement Corps (TRACE), confirmed the incident to the newsmen in Abeokuta.

Akinbiyi explained that the accident occurred at 3:45 p.m. at Day Waterman turning, on the expressway, in Obafemi Owode Local Government area of Ogun.

The TRACE spokesman alleged that the accident was caused by reckless driving on the part of the driver of the truck, with registration number T-14214LA

He said the truck driver made a dangerous U-turn, without observation, saying the Mazda car, marked KRD 975 HJ, rammed into it because of speed.

He said that nine people, comprising four men and five women were involved in the accident, saying five persons died while three others sustained injuries.

” Unfortunately, the driver of the Howo truck who caused the crash ran away,” he said.

Akinbiyi explained that the injured victims were taken to State Hospital, Ijaiye, Abeokuta, and Federal Medical Centre, Abeokuta for treatment.

He said the bodies of the deceased persons were deposited at State Hospital, Ijaye morgue, and Idera Hospital morgue, Sagamu.

He commiserated with the families of the deceased, appealing to articulated vehicle drivers to observe safety rules and avoid overbearing attitudes while driving.

In the same vein, the Federal Road Safety Corps (FRSC) said one person died while 10 others sustained injuries in an accident at Kobape on the Abeokuta -Sagamu expressway on Sunday.

Mr. Ahmed Umar, the FRSC Sector Commander in Ogun, confirmed the incident to newsmen in Abeokuta.

The FRSC officer explained that the accident involved a Toyota Previa marked KSF 145 HN and a Toyota Avensis with registration number AAA 301 HN.

Umar said the accident occurred at 6:35 p.m. and was caused by excessive speed and loss of control by both vehicle drivers.

” Both vehicles were moving on the same lane but on excessive speed and then the two drivers suddenly lost control and veered into the bush,” he said.

The sector commander stated that 16 people were involved which comprised 10 men and six women.

He said that 10 people sustained injuries while one man died in the accident.

He added that the injured victims were taken to Idera Hospital Sagamu and Federal Medical Centre, Abeokuta, saying that the deceased was deposited at the Idera Hospital mortuary.

The sector commander cautioned motorists on reckless driving, especially during the rainy season.

He also advised motorists to obey traffic rules and regulations and consider other road users.