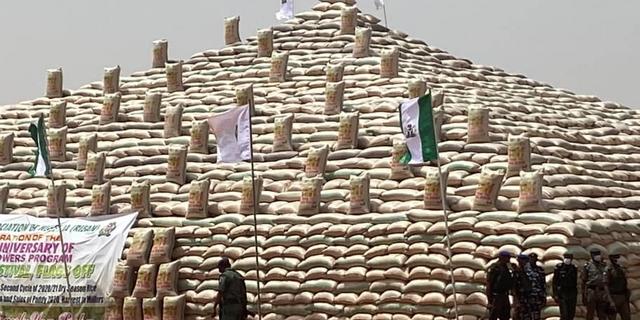 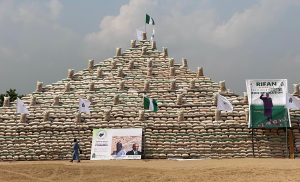 The `building of one million paddy rice pyramid’ at the premises of Abuja Chamber of Commerce and Industry (ACCI) which started mid-December 2021 became a centre of attraction for many passers-by.

This preceded the unveiling of Africa’s biggest rice pyramids on Jan. 18, 2022, by President Muhammadu Buhari as part of events to mark the rice festival and the launch of the 2021/2022 dry season production.

No doubt, the unveiling of the bag-paddy rice pyramids is coming at a time the country is faced with a looming food crisis, occasioned by insecurity, giving rise to a hike in the cost of food items.

Besides an elated President commending the Central Bank of Nigeria (CBN), for initiating the Anchor Borrowers Programme (ABP), through which the massive rice production was achieved, he assured Nigerians that the measure will boost efforts at reducing the price of rice in the country.

With the pyramid driving rice revolution in Nigeria, farmers under the aegis of Rice Farmers Association of Nigeria (RIFAN), believe that it has successfully demonstrated the possibility of improved local food production.

The association further said that it has the capacity to meet local demands and produce for exports.

According to the National President of RIFAN, Aminu Goronyo, the association has been able to produce 8.5 tonnes to 9 million metric tonnes monthly from which Nigerians consume 1.8 million tonnes daily.

“When the government ordered the shutdown of borders, we had to increase local production of rice as a staple food.

“We are happy to say that the rice consumed by Nigerians is locally produced and the best for consumption,” Goronyo said.

Highlighting the role of CBN in achieving this, the governor of the apex bank Mr Godwin Emefiele, said that about four million farmers across 21 commodities across the country were financed to boost food production.

“This has catalysed the rural economy and built a sustainable framework for financing smallholder farmers in Nigeria.

“As at the end of December 2021, we have financed 4.48 million farmers that cultivated 5.3 million hectares across 21 commodities through 23 Participating Financial Institutions in the 36 states of the federation and FCT.

In view of this, many Nigerians expect a crash in the cost of rice following the improved production as evident in the rice paddy stacked as pyramids in Abuja.

However, some analysts believe that the pyramids signify a lot, depending on how it is defined.

“It tells you the level of efforts being put in place to ensure that more rice is grown and that challenges associated with rice farming are being addressed gradually.

“More so, it shows you that the farmers are working hard to support food security in Nigeria.

“And this will translate to crash in the price of rice in the country, said Mr Shehu Muazu, Chairman Pyramid Sub Committee, RIFAN.

According to Muazu “RIFAN in collaboration with the Rice Millers Association of Nigeria will process the rice and sell at a discounted price.

“This will lead to drastic reduction in price once it starts rolling into the market.

“Our collaboration with the millers association rests on the agreement that they will sell at a discounted price to Nigerians.

“But the good news is that rice will remain the cheapest commodity as far as food is concerned due to the success recorded through the scheme,’’ Muazu said.

Kane commended the Federal Government for protecting local producers of rice by banning rice importation and setting measures against smuggling.

“The Federal Government has taken a very critical decision which is to put protection mechanisms on the local producers of rice and the ban on importation of rice.

“And more recently it has put measures in place to fight to smuggle so that locally-produced rice can thrive.

“Nigeria is one of the successful game-changers in massive rice production.

“This laudable initiative will set a revolution in Africa agricultural sector,’’ Kane said.

Mrs Anita Igbenova, a mother of four children, said that expectations are high as the only public benefit from the scheme is the ability to buy rice at a lower rate.

“The scheme can only attain complete success when the common man is able to buy rice at a reduced cost.

“Currently, the cheapest you can buy 25 kg bag of foreign rice is N16, 000 and we hope that when the paddy rice starts rolling into the market, it would lead to drastic reduction in the current price,’’ Igbenova said.

Mr Fredrick Idele, a rice trader in Nyanya market, noted that the Federal Government is taking the right step by encouraging local farmers to produce what is consumed in Nigeria.

Idele, however, expressed concern that the cost of rice has not reduced despite the improved production.

“Rice should be the cheapest commodity in the market as it is an everyday staple, but the mistake in the long period that we imported the commodity has deprived us of the benefit.

“This initiative will help us recover and draw more attention to further improve production and the quality of rice in Nigeria.

“We are growing above repackaging foreign rice, but taking our spot as Africa’s giant,’’ he said.

Mallam Hamisu Ibrahim, who was at the unveiling of the rice pyramid appealed to the Federal Government to intensify efforts on schemes that would accelerate food production and guarantee food security in the country.

“Equally, RIFAN and other commodity associations should not stop at the rice pyramid, but proffer solutions to some of the challenges confronting local food producers.

“Nigeria awaits more innovations, policies and programmes that will ease the burden of the common man,’’ Ibrahim said.