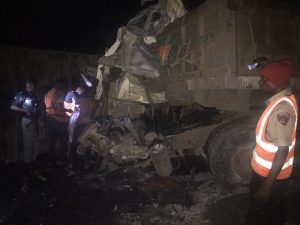 The Federal Road Safety Corps (FRSC) has confirmed the death of three persons in an early Wednesday multiple accidents at Mile 12 Ogere on the Lagos-Ibadan expressway.

The sector commander explained that the accident was caused by speeding and dangerous driving on the part of one of the truck drivers.

He added that one of the truck drivers was trying to negotiate a bend when the other truck which was coming from Ibadan, rammed into it

“Since the crash obstructed the road, the driver of the Micra car ran into it but was able to control his vehicle with little damage on the car,” he said.

He noted that seven people were involved in the accident, including one woman and six men.

Umar said that the remains of the deceased have been deposited at the FOS Morgue, Ipara.

“Traffic has been diverted and FRSC personnel are still on the ground trying to manage the situation and ensure that the obstruction is moved from the road,” he said.

The FRSC boss warned against ”dangers of excessive speed” especially when visibility is poor.

In the same vein, the Police Command in Jigawa has confirmed that six persons lost their lives in a fatal auto accident in the Kaugama Local Government Area of the state.

This is contained in a statement by the Spokesman of the Command, DSP Lawan Shiisu, on Tuesday in Dutse.

He said three other persons sustained injuries in the accident which occurred at about 11:20 p.m. along Hadejia-Kano road on Monday.

“That on June 26, at about 11:20 p.m., information on our disposal revealed that there was a fatal motor vehicle accident along Hadejia-Kano road.

“The accident involved a motor vehicle Lexus black in color with Registration number: AAA 153 EA, driven by one Habib Habib, aged 30 years of Yalleman quarters in Kaugama LGA,” he said.

Shiisu alleged that the driver, who was carrying eight passengers, lost control as a result of which the vehicle somersaulted.

The spokesman said that upon receipt of the report, police personnel rushed to the scene and evacuated the victims to General Hospital, Hadejia for medical attention.

He said that three others who sustained injuries were responding to treatment while the corpses had been released to their relatives for burial.

He said the Commissioner of Police, Mr Aliyu Tafida, condoled the families of the deceased and urged motorists to avoid overloading, night journey and reckless driving.

He said the CP further advised motorists to check tyres in their vehicles, brake and other essential parts before embarking on journey.

In another development, suspected gunmen on Monday attacked the Ngbo community in Ohaukwu Local Government Area of Ebonyi, killed three persons and destroyed properties believed to be worth millions of naira.

The spokesman of the State Police Command, SP Chris Anyanwu, told the newsmen in Abakaliki on Tuesday that the command was aware of the incident.

According to Anyanwu, the incident occurred at Ojiogu and Okpochiri Ukwagba Ngbo communities on Monday and `few persons` have been reported dead.

“Yes, we have some details. It happened yesterday, Monday.

Two houses and one shop were burnt.

Two motorcycles and one tricycle were also burnt by the hoodlums.

“The DPO in the area said there are few dead bodies seen on the ground.

The police are working round the clock to ensure the restoration of peace in the area,” the Police spokesman said.

He assured that efforts would be intensified to unravel the circumstances that led to ‘such unwarranted attack and loss of lives and properties.’