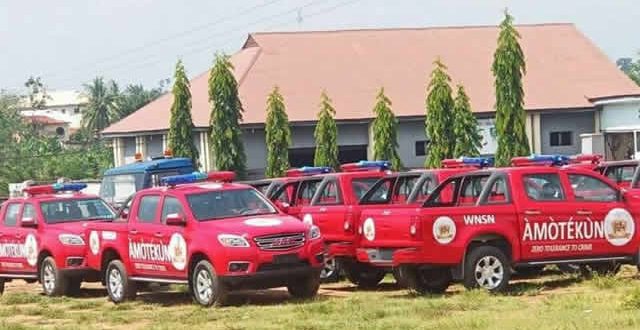 The National Association of Nigerian Students (NANS) has expressed solidarity with the Western Nigeria Security Network, code-named “Operation Amotekun,” in its efforts to help tackle security challenges in the South-West.

South-West Coordinator of NANS, Olawale Kappo, told journalists on Monday in Lagos that “Amotekun” became imperative because of security challenges in South-West which prompted a specially-designed security apparatus to save the situation

“The security of lives and property is a major concern for any serious government, the declaration of a security network is meant to complement the existing security measures.

“The initiative has received cheers from all quarters and is solely a social project meant for the betterment of the society. We vehemently oppose politicising this initiative,’’ he said.

Kappo said NASS was aware of the Civilian Joint Taskforce Movement in Borno which was also assisting the military in clearing out Boko haram fighters in the areas.

“These security outfits carry ammunition which means the task force is the same thing as Operation Amotekun,” the NANS leader said.

He also noted that about 23 states across the country currently have similar local security outfits states.

Speaking in the same vein, a chieftain of the All Progressives Congress (APC) in Lagos State, Hon. Moshood Salvador, on Monday described the Western Nigeria Security Network, code-named, “Amotekun,” as a good idea capable of addressing the security challenges in the geo-political zone.

He, however, said for the initiative to achieve its desired objective of improving security in the region, it had to be done in the right way; which is to back it up with each State House of Assembly’s legislation.

Salvador, National Treasurer of the Yoruba Unity Forum, made the statement when he paid a courtesy visit to the Lagos Office of the News Agency of Nigeria.

He therefore, called on South West governors to approach their respective state Houses of Assembly to make laws to support the initiative.

”That (Operation Amotekun) is one of the best things that have ever happened in the history of the Yoruba.

“I am the Treasurer of the Yoruba Unity Forum and I am telling you authoritatively that the forum is in full support of “Operation Amotekun”.

“But we must do it right; we are the ones giving people avenue to raise funny eyebrows.

“Let the state governors get their Houses of Assemblies to promulgate laws to use Amotekun as their local security.

“The moment they do that and bring everybody on board, there is nothing anybody can say about it because that is the law,” he said.

Salvador, also a former PDP Chairman in Lagos State, added that the debate about whether the security initiative was constitutional or not would not arise if the right laws were made to back it up.

According to him, the problem of insecurity in the country is a serious issue which required result-oriented ideas to address it.

On the war against insurgency, the APC chieftain said the war was dragging because of the international support the terrorists were getting from those who shared their cause.

He said were it not for foreign support and conspiracy, the war against Boko Haram and Islamic State of West Africa Province (ISWAP) would have been won a long time ago.

“This insurgency we are talking about has international undertone and dimension, that is why it is seemingly intractable.

“So, we just have to look at all those areas and handle all these people, when we do all that, then victory is near,” he said.

Salvador urged Nigerians, particularly people in the North East not to leave the war against insurgency for the government and military alone but give the right support to address the problem.

The APC chieftain called for improved intelligence gathering from both the military and local communities to strengthen the war against insurgents.

Salvador said the future of the country was in the hands of the youths and urged them to start taking the steps to build a country of their dreams.

The APC chieftain advised youths against political docility, urging them to participate actively in politics and use the platform to define their future.

The former PDP Chairman urged leaders to be accountable and always work to justify the confidence reposed in them by the people.