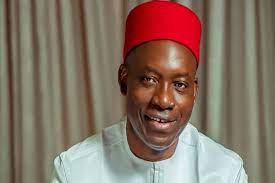 Dr Chinedu Jideofo-Ogbuagu, National Coordinator of the group in a statement issued in Abuja, also congratulated other contestants in the race and described them as heroes of democracy.

While pointing out that the pro-democracy group recorded a reflection of the balance of party strengths, Jideofo-Ogbuagu said there was no need for recrimination and litigation.

“We see a reasonable reflection of the known balance of party strengths in Anambra.

“No-one should distract the newly-elected governor as he must prepare for the inauguration and actual governance of the state,’’ the national coordinator stated.

According to Jideofo-Ogbuagu, the election has been won and lost.

Chukwuma Soludo of the All Progressives Grand Alliance (APGA) won the election with 112,229 votes while Valentine Ozigbo of the Peoples Democratic Party (PDP) came second with 53,807 votes.

Soludo won in 19 out of the 21 local government areas of the state in the election results declared by INEC on Wednesday in Awka.

“Congratulations to the winner, Chukwuma Soludo of APGA and congratulations too to the gallant losers, principally, Valentine Ozigbo (PDP) Andy Uba (APC) and Ifeanyi Uba (YPP).

“They are all heroes of democracy,’’ Jideofo-Ogbuagu stated.

In another development, the Federal Government told a Federal High Court, Abuja that a team of lawyers of leader of the proscribed Indigenous People of Biafra (IPOB), Nnamdi Kanu, on a Wednesday, staged a walkout before the trial opened.

Counsel to the Attorney-General of the Federation (AGF), Mohammed Abubakar, told Justice Binta Nyako, following non-appearance of any lawyer on Kanu’s behalf shortly after the case was called.

The newsmen report that when the matter was called, Abubakar announced an appearance for the AGF.

However, no lawyer was in court to announce an appearance for the leader of the IPOB.

Abubakar then told the court that Kanu’s counsel, led by Ifeanyi Ejiofor, staged a walkout because some of the lawyers, including the American lawyer, Bruce Fein, were denied access.

Justice Bin ta then adjourned the matter until Jan. 19 and Jan. 20 for trial continuation.