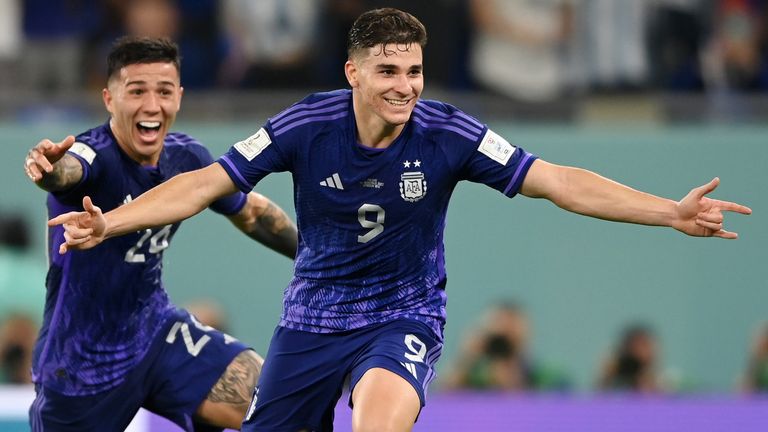 Lionel Messi missed a first-half penalty kick but Argentina’s Alexis Mac Allister and Julian Alvarez scored in a 2-0 victory over Poland at Stadium 974 on Wednesday in Qatar.

The result however ensured that both teams booked their places in the knockout stages of the 2022 FIFA World Cup.

Argentina’s victory moved Lionel Scaloni’s side to the top of Group C and they will face Australia in the last 16.

Argentina took the lead just one minute into the second half when Mac Allister got on the end of Nahuel Molina’s cross.

In spite of making weak contact, he saw his shot creep over the line with Polish goalkeeper Wojciech Szczesny beaten.

The goal was just a reward for Argentina who had dominated possession while Poland had barely managed to get out of their own half.

The South American side’s goalkeeper Emiliano Martinez was a mere spectator for the majority of the game.

The second goal was the result of some patient build-up, where Argentina knocked the ball around before Enzo Fernandez unlocked the defence with a through-ball for Alvarez.

He found space in the penalty box and smashed the ball into the top corner.

Earlier, Poland was up in arms when Argentina was awarded a controversial penalty kick after a VAR check for a foul on Messi.

That was when Szczesny’s glove brushed his face as the Paris Saint-Germain (PSG) forward rose up for a header at the far post.

But Szczesny was up to the task and in spite of the thousands of Argentina fans raising the decibel levels inside the arena, he kept his composure and guessed correctly.

He dived to his left and used one hand to swat aside Messi’s effort from the spot.

In spite of the miss, Messi ran the show for Argentina in a match where the two skippers represented FC Barcelona’s past and present.

With a last-16 spot and potential elimination both on the cards in a close group, it was Barca’s record goalscorer Messi who was at the heart of Argentina’s attacks.

He dictated play by dropping deep and tormented the Polish defence.

Poland’s Robert Lewandowski, who has 18 goals in 19 games for Barca this season, did not have a single attempt on goal.

At the other end, Szczesny had been kept busy the entire half with the Poland defence breached time and again.

But the Juventus goalkeeper stood firm to deny Argentina who grew more confident with every attack.

He first denied Alvarez when the Manchester City forward broke through the offside trap.

Then, he tipped Angel Di Maria’s cross over the bar when his Juve teammate attempted to score directly from a corner kick.

But Szczesny could do nothing but scramble when Mac Allister took his shot even before Poland could settle down after the restart.

Alvarez’s shot for the second goal was too good for any goalkeeper.

“It’s so emotional for me, for the whole squad. It’s a dream come true,” Mac Allister told reporters.

“I debuted with this team, I’m so proud of that. And now managing to score in a World Cup —- I’m so happy.

“(After Messi’s penalty kick) we tried to stay positive, to stay calm. We did not feel down. We tried to be optimistic…Fortunately, we managed to win and go through.”

Argentina nearly made it 3-0 in second-half added time when Nicolas Tagliafico was released down the left and he chipped the ball over Szczesny.

But he saw Jakub Kiwior track back to make a timely intervention and head the ball off the line.

However, Argentina got what they wanted — leapfrogging Poland to take top spot in the group and avoid an early knockout fixture against mighty France.

Poland, meanwhile, will be relieved to reach the last 16 for the first time since 1986.

How They Finished in Group C

* Argentina and Poland advance to the second round