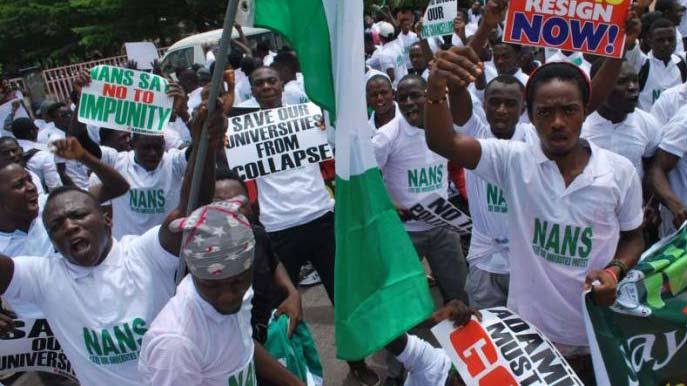 The National Association of Nigerian Students (NANS) has resolved to organise a nationwide mass protest to press home its demand for the immediate reopening of all universities across the country.

This is part of resolutions reached in a communiqué issued on Wednesday in Enugu after NANS Students’ Leaders Emergency Virtual Meeting held on Nov. 9.

The communiqué said that the continued strike was an organized crime against students’ career and educational pursuits.

It said that NANS with no hesitation declares 14-day Ultimatum for both parties (ASUU and FG) to resolve their impasse for campuses to re-open or risk Mass Protest.

According to the statement, #EndASUUStrike protest will have economic shut down as the major target.

The statement reads in part: That NANS declares the necessity of minimum of two academic session school fees waiver for Nigerian students in both state and federal institutions in the spirit of COVID-19 palliative to ameliorate the economic effects of the lockdown occasioned by the global pandemic.

“This is to avert mass drop out of students which may increase crime and criminality among youths in the country.

“That the government has failed to prioritize education, hence the failure to deploy necessary fund for complete overhauling of education sector and total revitalization of university education in Nigeria.

The association noted that governments had not earmarked meaningful budgetary allocation to the sector in line with the recommendation of UNESCO 26 per cent educational budgetary allocation.
According to the students body, this can be traced as the root cause of incessant strike by the Academic Staff Unions in all Nigeria tertiary institutions.

Also read:  ASUU urges FG to take out IPPIS as condition to call off strike

“That NANS has affirmed the perpetual and continued industrial actions  by ASUU as the only tool to press home her demands as an organized crime against students’ career and educational pursuits.

“Consequently, NANS with no hesitation declares 14 days Ultimatum for both ASUU and FG to resolve their impasse for our campuses to re-open or risk Mass Protest tagged #EndASUUStrike  Nationwide – with economic shut down as the major target.

“That while both Government and ASUU lose nothing at the end of every strike, both salaries, promotions and other emoluments among others flows uninterrupted;

which are considered an act of deliberate wickedness.

“That NANS, on behalf of Nigerian students shall approach the Federal High Court to seek legal redress on ASUU and FG in demand for compensation/damages for Nigerians students’ time wastage, life plan disruption and career delay.

“These shall include; mandatory alternative modalities for ASUU to press home her members’ demand without interrupting academic calendar.

The statement said that the leadership of NANS, led by Comrade Chidi Ilogebe would proceed to have a press conference to address Nigeria students, Federal Government and ASUU on our positions and next line of action as resolved therein.