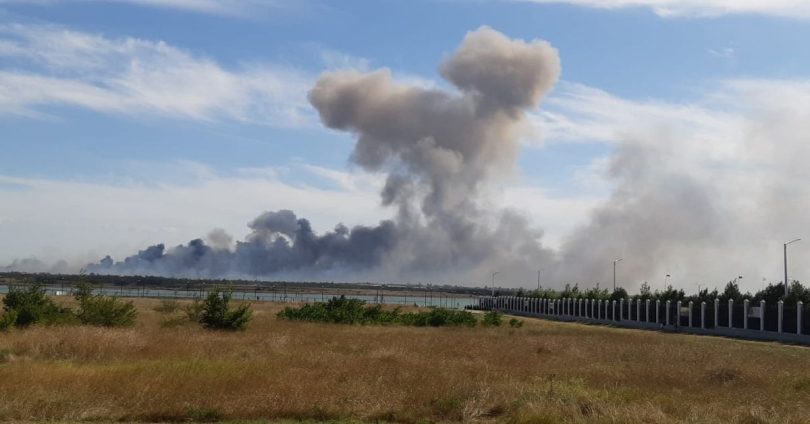 Explosions rocked an ammunition depot and disrupted trains in Russian-annexed Crimea on Tuesday, the latest such incident in a region Moscow uses as a supply line for its war in Ukraine.

Kyiv tauntingly hinted at involvement which, if true, could show a new capability to strike deeper into Russian territory, potentially changing the dynamic of the six-month conflict.

Calling the incident “sabotage”, Moscow confirmed that two people were wounded, railway traffic had been halted and about 2,000 people in a nearby village evacuated.

The Crimean peninsula on the Black Sea, which Russia seized from Ukraine in 2014 in a move unrecognised by most countries, is the base of Russia’s Black Sea Fleet and is popular in the summer as a holiday resort.

In Tuesday’s incident, an electricity substation also caught fire near the town of Dzhankoi in north Crimea, according to footage on Russian state TV.

It showed explosions on the horizon which, authorities said, came from the ammunition detonations.

Russia’s RIA news agency said seven passenger trains had been delayed and that rail traffic on part of the line in northern Crimea had been suspended.

That could disrupt its ability to support troops in Ukraine with military hardware.

Ukraine has not officially confirmed or denied responsibility for explosions in Crimea, though its officials have openly cheered incidents in territory that, until last week, appeared safe in Moscow’s grip beyond range of attack.

After Tuesday’s new blasts, Ukrainian presidential adviser, Mykhailo Podolyak, and Chief of Staff, Andriy Yermak, both exulted on social media at “demilitarisation”; an apparent mocking reference to the word Russia uses to justify its invasion.

“A reminder: Crimea (as a) normal country is about the Black Sea, mountains, recreation and tourism, but Crimea occupied by Russians is about warehouses, explosions and high risk of death for invaders and thieves.

“Operation ‘demilitarisation’ in the precise style of the Armed Forces of Ukraine will continue until the complete de-occupation of Ukraine’s territories.

“Our soldiers are the best sponsors of a good mood,’’ Yermak wrote on Telegram.

In another incident on Tuesday, plumes of smoke were seen at a Russian military airbase near the settlement of Hvardiyske in central Crimea, Russia’s Kommersant newspaper reported.

Kyiv aims to disrupt Russian supply lines ahead of a planned Ukrainian counter-attack.

Russia’s Crimean bases are mainly out of range of the main rockets Western countries acknowledge giving Ukraine, raising the prospect that it has acquired new capability.

With the war raging since Feb. 24, attention has also focused in recent days on shelling in the vicinity of the Zaporizhzhia nuclear plant in southern Ukraine.

Both sides have blamed each other for risks to Europe’s largest nuclear facility, which Russia has seized though Ukrainian technicians operate it.

The conflict has caused millions to flee, killed thousands and deepened a geopolitical rift between Moscow and the West.

Russia calls its invasion a “special military operation” to demilitarise its neighbour, protect Russian-speaking communities and push back against the NATO military alliance’s expansion.

In a speech to a security conference, Putin accused the United States of trying to drag out the Ukraine war by backing Zelenskiy’s government while also whipping up frictions in Asia.

He cited the AUKUS security pact between Australia, Britain and the U.S. as evidence of Western attempts to build a NATO-style bloc in the Asia-Pacific region.

U.S. House Speaker Nancy Pelosi’s visit this month to Taiwan, which China claims as its own, was “part of a purposeful, conscious U.S. strategy to destabilise and sow chaos in the region and the world’’, Putin said.

Even as the biggest attack on a European state since 1945 ground on, there was progress on a grain deal to ease a global food crisis created by slumping Ukrainian exports.

The ship Brave Commander left the Ukrainian port of Pivdennyi, carrying the first cargo of humanitarian food aid bound for Africa from Ukraine since Russia’s invasion.

On the battlefield, the sides reported no major changes to positions.

Ukraine reported continued Russian shelling and rocket attacks in the Donbas eastern area, and success in repelling attempted Russian advances near the Lysychansk oil refinery in the Luhansk region of the Donbas.