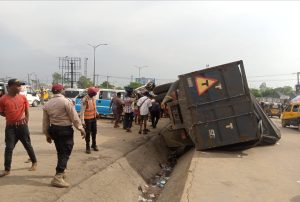 Scene of the accident at Upper Iweka in Onitsha

The Sector Commander, Mr Adeoye Irelewuyi, confirmed the accident to the newsmen in Awka on Thursday.

Irelewuyi said the accident, which occurred on Wednesday evening, could be attributed to brake failure and loss of control.

“Eyewitness report indicates that the brake of the Mercedes Benz truck, fully loaded with tiles and other building materials failed, the driver lost control and rammed into three stationary vehicles and two pedestrians,  and crashed.

“A total of four persons comprising three male adults and a female adult were involved in the crash.

“FRSC rescue team from Upper Iweka outpost Command rushed the victims to Toronto hospital, Onitsha, where a male adult and a female pedestrian were confirmed dead and their bodies deposited at the hospital morgue, ” he said.

He said that efforts were being made to tow the truck to the Central Police station in Onitsha.

While condoling with the families of the dead, the Commander urged motorists to ensure their vehicles met minimum safety standards before plying the road.

In the meantime, the Federal Road Safety Corps (FRSC) on Wednesday cautioned tanker drivers against speeding on the highways to avert explosions.

FRSC Commander, Ore Unit Command, Mr Sikiru Alonge, gave the advice in an interview with the newsmen following the prevention of a tanker explosion on Tuesday in Ore, Ondo State.

Alonge said that the fuel-laden tanker tumbled and discharged its content on the highway while negotiating a bend on the Ore Interchange Bridge.

The official said the combined efforts of the FRSC, Ondo State Water Corporation (ODWC) and other security agencies, averted the explosion.

He stated that the incident caused heavy traffic on the axis, adding that the corps had tried its best to ensure a free flow of traffic afterwards.

“We contacted the Fire Service in Ore, but when they were not available, we decided to look for an alternative place to deposit the fuel.

“The efforts of the water corporation, by spraying water on the petrol, prevented the explosion.

“We hereby urge drivers of fuel-laden tankers to always exercise patience on the highways when ascending and descending bridges, to avert tragedy,” Alonge said.