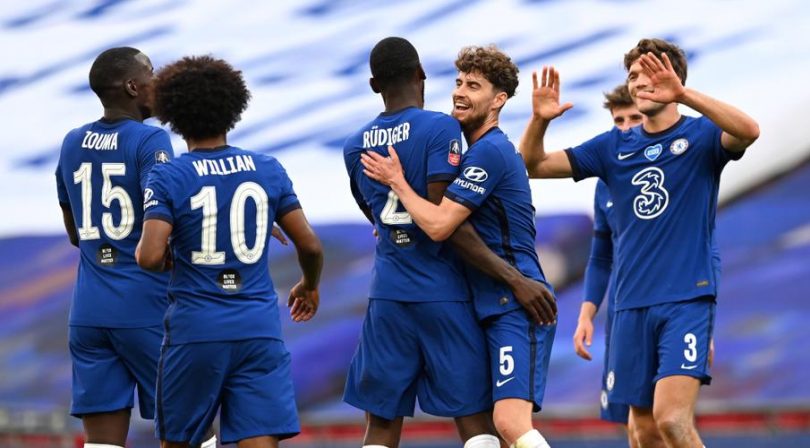 Chelsea beat Manchester United 3-1 on Sunday to book their place in an all-London FA Cup final.

But they were helped by two glaring errors from goalkeeper David de Gea and an own goal by Harry Maguire.

Chelsea, who face rivals Arsenal in the Aug. 1 showpiece, had lost to Manchester United three times this season but dominated this match.

They took control with goals either side of half-time from Olivier Giroud and Mason Mount.

Chelsea manager Frank Lampard was delighted with the discipline of his team, who ended Manchester United’s 19-game unbeaten run.

“People ask a lot at this time of the year about mentality and character and our team was full of it today,” he said after the match at an empty Wembley, the national stadium’s gates locked because of the COVID-19 pandemic.

Manchester United was forced into a change at 0-0 late in the first half when Eric Bailly was carried off after clashing heads with fellow defender Maguire.

But it was Chelsea who took the lead 11 minutes into first-half stoppage time when Giroud flicked a cross by captain Cesar Azpilicueta at De Gea.

The Spaniard failed to get enough of a hand on the ball to stop it spinning over the line.

Chelsea doubled the lead a minute after the restart when Mason Mount pounced on a poor pass by Brandon Williams to shoot from the edge of the box.

Also read:  Leeds United back in EPL after 16-year absence

It looked like De Gea would make a comfortable save but he could only steer the ball into the net.

“I know David is a very mentally strong goalkeeper and person, but of course he knows he should save that one.

“But that’s part of football,” Solskjaer said, adding that the Spaniard would remain the club’s first-choice goalkeeper.

Manchester United struggled to create any chances to narrow the deficit.

Chelsea sealed the victory when Maguire, under pressure from Antonio Rudiger, connected with a cross from Marcos Alonso with his studs and diverted the ball past the hapless De Gea.

Solskjaer was left to rue his decision to drop his usual FA Cup goalkeeper Sergio Romero and put De Gea in the starting team.

This was in spite of errors by the Spain goalkeeper earlier this season.

By contrast, Lampard kept faith with his number two goalkeeper Willy Caballero who has been limited mostly to cup appearances for Chelsea this season.

The Argentine had a quiet afternoon with a tired-looking Manchester United rarely threatening.

The win leaves 42-year-old coach Lampard, the club’s record goalscorer, on course for a positive first season in charge of Chelsea.

They look on course to qualify for the UEFA Champions League, possibly alongside Manchester United, as well as reaching the FA Cup final.

In another development, Lionel Messi finished as top goalscorer in Spanish La Liga for a record seventh time after netting twice as dethroned champions FC Barcelona went on a scoring spree on Sunday.

They ended their disappointing 2019/2020 campaign on a high with a resounding 5-0 win at Alaves.

Barca finished the season second in the standings on 82 points, five points behind newly-crowned champions Real Madrid who drew 2-2 at Leganes later on Sunday.

Teenage forward Ansu Fati put Barca in front midway through the first half after the visitors hit the woodwork three times.

Defender Nelson Semedo hit the fourth early in the second half before Messi struck again, to end the campaign on 25 league goals.

Messi, who also finished as top marksman for a fourth consecutive season, eclipsed the benchmark he previously shared with the late Telmo Zarra.

But he said he would have rather have won the league.

“Individual prizes and objectives are secondary. It’s an important achievement to win it seven times, but I would have liked it to have been accompanied by the La Liga title,” Messi said.

Barca’s captain had made headlines on Thursday following his angry post-match interview after the 2-1 loss to Osasuna, blasting the team as weak and inconsistent.

He also appeared to criticise the running of the club.

But he was in a happier mood after the dominant performance against Alaves.

He said the team felt more confident ahead of next month’s UEFA Champions League last 16-second leg game with Napoli, which they host with the score tied at 1-1.

“Today we saw something else. It was a difficult game due to the situation we were in and the kick-off time and heat.

“But the team responded with a different attitude and showed great commitment,” Messi added.

“We took a long hard look at ourselves from the inside, which is what we needed to do. We have not had a good season in terms of performances or results, but today we took a step forward.

“It’s an important step for what’s coming next.”