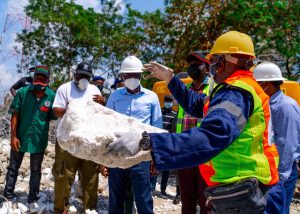 Lagos State Governor, Mr Babajide Sanwo-Olu on Thursday says 19 families have so far submitted names of those suspected to be trapped in the collapsed Ikoyi building.

Sanwo-Olu said this while updating newsmen at the site of the collapsed Ikoyi building, adding that the register had been opened for such purpose.

The governor was at the site for the third time within 72 hours, to see how the search and recovery operation was being conducted, and also boost the morale of the emergency responders.

He was in the company of his deputy, Dr. Obafemi Hamzat, at the site for over three hours.

Sanwo-Olu said that the ongoing corona inquest on the bodies evacuated from the site was expected to be concluded by Friday after which families would be invited to identify them.

He said that the actual number of persons trapped in the collapsed 21-storey building remained unclear as at Thursday afternoon, but 32 fatalities have been recorded, as at then.

The governor expressed satisfaction with the rescue operation, commending the first responders for their efforts.

He also met with some of the distressed family members at the site, cheering them and raising their hopes, while the rescue efforts progressed.

”Yesterday (Wednesday), we opened a register for people that have missing persons or loved ones whom they believed must have been at the site before the collapse.

”As I speak here, it is only 19 names of missing persons that have been registered. Some of them have pictures, others do not. This list would help us to get information on manifest of those at the site.

”As at this afternoon, we have recovered a total of 32 bodies. We are conducting a corona inquest on the bodies and by tomorrow (Friday), we hope the exercise would have been concluded.

”That is the deadline we gave to the corona so that the families can come and identify the bodies recovered so far,” Sanwo-Olu said.

Earlier on Thursday, the governor visited Lagos Island General Hospital, where survivors of the building collapse were being given medical attention. 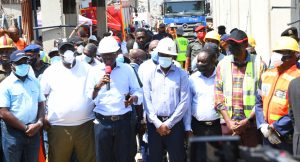 He said that one of the nine people rescued alive had been moved to the Lagos State University Teaching Hospital (LASUTH) in Ikeja for advanced medical examination, but he was not in a life-threatening situation.

Three survivors were discharged on Tuesday.

Sanwo-Olu said that he had ordered a structural integrity test on the two high-rise structures in the premises where the 21-storey collapsed, so as to safeguard the lives of emergency workers on the rescue operation.

He appealed to journalists covering the incident on speculative reporting and sensationalism, asking them to confirm any unclear details about the search and rescue operation from the official channel of communication.

The governor was reacting to inconsistent figures of fatality being spread by the media.

”Ministries of Information, Special Duties and Health are fully on ground at the scene. Among these key ministries, members of the public can get answers to any information not clear to them,” Sanwo-Olu said.

This is with the support of construction giants, Julius Berger, Craneburg, HiTech and China Civil Engineering Construction Company (CCECC).

In the same vein, Lagos State Governor, Mr Babajide Sanwo-Olu, on Thursday, inaugurated members of the investigation tribunal to inquire into the causes of the collapsed 21-storey building on Gerrard Road, Ikoyi.

Sanwo-Olu also signed an executive order legitimising the composition of the panel and empowering it to invite or summon anyone and organisation useful for the investigation.

Speaking during the inauguration held at the Lagos State Waterways Authority (LASWA) building, Ikoyi, he said that the state government would unravel and get to the root cause of what had happened.

”So that indeed, we all can truly learn from this very unfortunate incident and we all can be part of history and ensure that we can live in a safe and secure environment,” Sanwo-Olu said.

He said that the duty of the panel would begin immediately and they were expected to report back within 30 days while urging the members to discharge their duties without fear or favour. 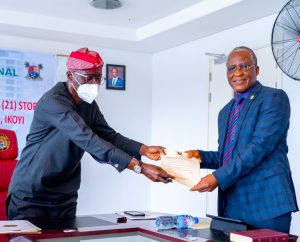 Lagos State Governor, Mr Babajide Sanwo-Olu (left), presenting the sworn oath to the Chairman, Tribunal of Inquiry into the Ikoyi building Collapse, Mr Toyin Ayinde, during the inauguration of members of the Tribunal at LASWA Building, Ikoyi, on Thursday, Nov. 4, 2021.

Members of the tribunal drawn from the private sector included the President of Nigeria Institute of Town Planners (NITP), Mr Toyin Ayinde (chairman), while Ekundayo Onajobi, a lawyer in a private law firm, is the Secretary.

Sanwo-Olu said that the public deserved to know what went wrong, adding that though the work of the panel would not bring back the lives lost, but would help to prevent the reoccurrence of such a tragic event.

”We are gathered here to perform a sad but necessary duty, which is the inauguration of a six-member Panel of Inquiry into the collapse of the 21-storey building at Gerrard Road, Ikoyi, on Monday.

”It is a solemn moment for me personally, but this is an important assignment. Indeed, the generation coming after will not forgive us if we don’t do the right thing on this incident.

”Lagosians and the world will be watching and waiting keenly, with the full expectation that the immediate and remote causes of this tragedy will be uncovered,” he said.

Sanwo-Olu identified with distraught families of victims trapped under the collapsed structure, expressing the belief that the outcome of the investigation would assuage their pains and worries. 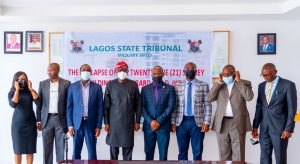 He said that the oath taken by the tribunal members empowered them with adequate privileges of government powers to conduct an independent investigation without fear, favour, interference and restrictions.

The governor urged the tribunal members to bring their expertise and professionalism to bear in unravelling the infractions that brought down the building.

”What this tribunal will be doing over the course of the next few weeks will have important implications for building safety and for emergency response, not just in Lagos, but in the entire country.

”It will also go a long way toward ensuring that the families of the innocent victims of this avoidable tragedy experience some sort of closure and get justice,” Sanwo-Olu said.

Giving the vote of assurance, Ayinde said Lagos was in its ”dark period”, given the record of fatalities from the site of the collapsed building.

He pledged on behalf of members to discharge the duty with all sense of responsibility and in line with ethics.

”We accept at our own liberty and with humility the important assignment the state has placed before us. We will go ahead with a sense of dedicated responsibility.

”This exercise can only make the expected difference if we all agree to place value on Nigerian life.

”As members, we promise to be guided by professional standards and hope that we will chart a new course that will guarantee the safety of lives of Nigerian citizens,” Ayinde said.