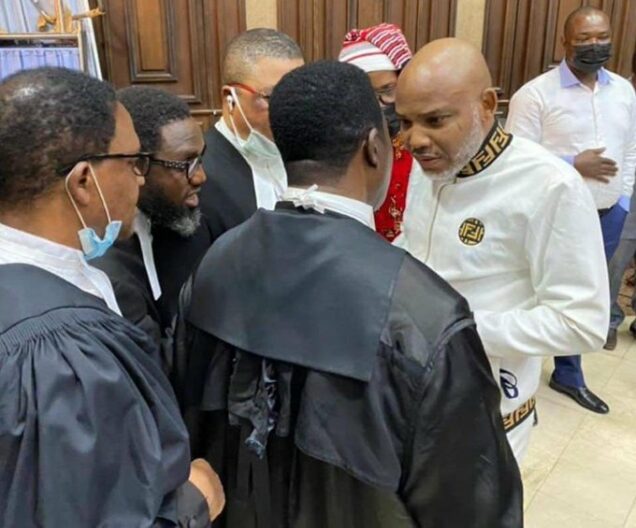 A Federal High Court, Abuja, on Wednesday, fixed April 8 for ruling in a motion filed by the detained leader of the proscribed Indigenous People of Biafra (IPOB), Nnamdi Kanu.

Kanu is challenging the charge preferred against him by the Federal Government.

Justice Binta Nyako fixed the date after counsel for the prosecution and the defendant adopted their arguments for and against Kanu’s preliminary objection.

The newsmen report that Kanu is standing trial on an amended 15-count charge bordering on treasonable felony.

When the matter was called, counsel to the Attorney-General of the Federation (AGF), Shuaibu Labaran, informed that the court adjourned to take two motions filed by Kanu.

He said while the first motion asked the court to strike out the charge against him, the second application sought an order of the court for bail.

“We have filed respective counters and are ready for the business of the day,” he said.

Counsel to the defendant (Kanu), Chief Mike Ozekhome, SAN, said he had a notice of preliminary objection dated Jan. 18 and filed Jan. 19.

“It is praying for an order striking out the 15-count amended charge for being incompetent and consequently depriving the jurisdictions of this court to entertain the entire charge,” he said.

Ozekhome pleaded with the court to discharge and acquit Kanu of all the counts.

He said the application had 34 grounds and was supported by 36-paragraph affidavit.

“We have a written address attached and further affidavit in reply on points of law,” he said.

In response, Labaran said he was yet to be served with the further affidavit, and a copy of the application was made available to him.

Ozekhome, while adopting all the processes filed, asked the court to quash and strike out the 15 counts against his client.

Adumbrating, the senior lawyer argued that the entire charge did not disclose any case of prima facie against Kanu.

He said the Federal Government had not disclosed any reasonable cause of action against the defendant, citing some paragraphs in the preliminary objection.

According to him, the defendant was unlawfully and brutally extraordinarily renditioned without recourse to the international law on extradition.

He also argued that the charge preferred against Kanu appeared to give the court a global location.

He said the charge did not state specifically the location where the alleged offence was committed contrary to the Administration of Criminal Justice Act (ACJA), 2015, arguing that the court lacked the jurisdiction to hear the matter.

Ozekhome said though the prosecution alleged that Kanu made an inciting broadcast,  the location where the offence was committed was not stated.

He said the prosecution was still using proof of evidence used in 2015 against the defendant.

On the allegation that Kanu was an IPOB member, the lawyer said the proscription matter was still being challenged at the Court of Appeal, and that the court was yet to decide on it.

“They are charging the defendant under a law whose conclusiveness has not to be concluded under the law,” he said

He said paragraphs seven to 19 of the prosecution’s counter-affidavit offended the Evidence Act.

According to him, the charge did not state where the act of terrorism was committed.

“I urge my lord to look at it very calmly! there is nothing in the charge,” he said.

Labaran, on his part, disagreed with Ozekhome.

He said after they were served with the defendant’s preliminary objection, his office filed a 20-paragraph counter-affidavit dated Feb. 2 and filed Feb. 3.

He said the application was supported by a written address in compliance with court rules.

According to him, the defendant’s application lacks the substance that will warrant this court granting the prayers.

“We urge my lord to refuse this application and direct the prosecution to open its case in accordance with the spirit of Practice Direction issued by the chief judge of this court called, ‘Federal High Court Criminal Direction,’” he said.

Labaran argued that Kanu had no affidavit before the court “because the paragraphs in the application have offended Section 115 of the Evidence Act and should be expunged.”

On the prescription order, the lawyer argued that not even an application for a stay of proceeding was filed in any way that could have affected the proceedings in the case, citing Section 306 of ACJA, 2015.

“The position as at today is that IPOB is a proscribed association by the principle of our elementary law and it was duly proscribed under the relevant law,” he said.

“Therefore, this court has jurisdiction to entertain the case,” he said.

He said going by Section 94 of ACJA, and contrary to the defence submission that the charge did not state the location where the offence was committed, he said: “The entire law is very clear.”

“If the offence is committed at sea or outside Nigeria, this court has jurisdiction to hear it,” he insisted.

He argued that as to the alleged erroneous nature of the charge, Section 216 of ACJA had adequately taken care of that.

“This is applicable to all the charges, particularly count 15,” he added.

The lawyer, who referred the court to Section 216(4) of ACJA, read a part of the section, saying: “This is the position of the law and therefore, the charge has the full force of the law.”

According to him, Section 396 of ACJA also reinforced this.

He said the application lacked merit, urging the court to dismiss it.

Labaran said the further affidavit filed by Kanu was not ripe to be taken.

“This is early to my knowledge. This should happen when fresh facts are raised which will warrant this,” he said.

The prosecution, who urged the court to dismiss Kanu’s preliminary objection, said the trial has commenced for over five years.

Ozekhome, in response, said the prosecution did not deny their counter affidavit or provide any response to it, but that they only gave a general denial to all the averments.

Justice Nyako, who said the ruling on Kanu’s preliminary objection would take priority over other applications before the court, fixed April 8 for its ruling.

Earlier at the resumed hearing, Ozekhome had complained that despite the order of the court, the Department of State Services (DSS) refused to allow his client to change clothes.

He said the DSS had claimed that Kanu refused to change because he was pleased with the designer wears he put on.

The senior lawyer said Kanu’s younger brother and his lawyer visited the DSS facility about three times to give him another outfit but personnel refused.

“Ejiofor (one of the lawyers) had to call the director of Legal Services, sitting here, and he said he would contact the Director of Operations to ensure that the order was carried out but to date, nothing has happened,” he said.

He also told the court that in 2015 when Kanu was arrested, his reading glasses were seized from him and that it was still with the security outfit.

Ozekhome said even the eye glasses his client used when he was recently arrested abroad had been broken.

“And now, he has nothing to read,” he said, adding that he did not want him to become blind as a result of the development.

Justice Nyako then asked the director of Legal Services of the DSS on why the office denied Kanu of changing his outfit.

Responding, he said the family brought clothe with lion’s heart which could not be allowed by the service “because it offends the standard operating procedure.”

The judge then asked Kanu which clothe he would love to wear.

“I want to wear the clothe of my people which is called ‘Isi Agu,’” he responded.

When the judge asked him why he liked to wear the particular attire, Kanu said: “But I don’t know why I should not wear it?”

“Because I said so,” the judge responded

Nyako then reminded Kanu that few years ago when the matter began, she gave him the freedom to wear any attire of his choice to the court.

Nyako, however, decline Kanu’s request to wear the traditional attire to court, advising that he should be given another clothe on the next adjourned date.

On the issue of his eye glasses, the DSS officer said they couldn’t locate where it is.

The judge, therefore, directed the security agency to make provision for another eye glasses for Kanu.

“By next adjournment, let him come in glasses,” she held.