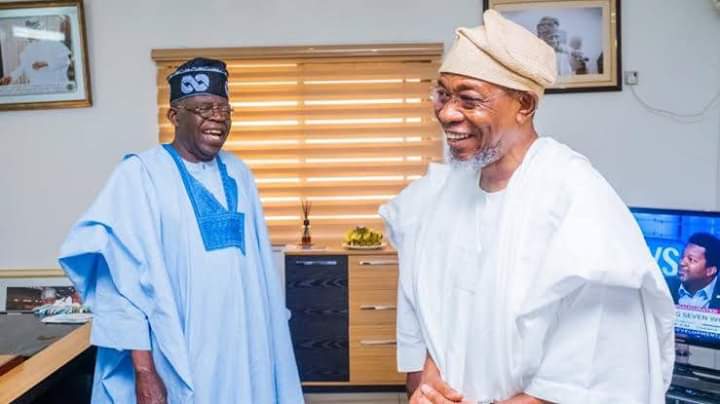 Sen. Bola Tinubu, National Leader of All Progressives Congress (APC), on Tuesday debunked speculations of any cold war between him and the Minister of Interior, Ogbeni Rauf Aregbesola, stating that he remains his leader.

The assurance, however, failed to seal the perceived cracks in the APC Lagos glowing armour as the Governor’s Advisory Council (GAC) also, instantly announced the dissolution of all political groups within the All Progressives Party (APC) in the state, particularly the Justice Forum (JF) said to be controlled by the Minister of Interior, Mr Rauf Aregbesola.

Tinubu, in a statement by his media adviser, Tunde Rahman, stated that ‘there is no war, cold or hot, between us.”

The Governor’s Advisory Council (GAC), the highest decision-making body within the APC in Lagos, had on Tuesday passed a resolution calling for the disbandment of all factional groups within the party.

There were online media reports that the resolution had worsened a phantom cold war between Tinubu and Aregbesola.

Tinubu, however, said that there had never been and there would never be any form of misunderstanding between the two of them following the dissolution of the groups.

He said that Aregbesola, a former governor of Osun, had been unswervingly and wholly committed to the progressive ideology of Tinubu’s political family.

“Today, the Governor’s Advisory Council, the highest decision-making body within the All Progressives Congress in Lagos State, passed a resolution calling for the disbandment of all factional groups within the party.

“This was to promote discipline, harmony and cohesion and engender party supremacy. The APC is one united political family in Lagos. I remain Ogbeni Aregbesola’s leader,” Tinubu said.

The former governor of Lagos said: “Our political family remains strong. The GAC is a very strong body within the APC leadership structure in Lagos.

“And we are staying focused in our commitment to building and maintaining a cohesive political party. “Its resolution is not targeted at any particular individual or collection of individuals.

“The resolution was to restate the often-stated position that the only group known to us is APC and not any of the factional groups. The GAC position does not imply any division within the group.

“The resolution is well-meaning and should not be misinterpreted,” he said.

Tinubu expressed disappointment in the claims, adding that to do so impulsively as the authors of the report had done was to take the frontier of reporting away from facts to the realm of groundless speculations.

He noted that the GAC position does not imply any division within the group.

“The resolution is well-meaning and should not be misinterpreted. It was to renew the commitment to APC and its unity.

“Ogbeni Aregbesola is a strong member of the political family,” he said.

In the meantime, the 27-member GAC, the highest decision-making organ of the party in Lagos State, announced the dissolution on Tuesday, alongside other groups, including the Mandate Group, after a meeting in Lagos.

Alhaji Tunde Balogun, the state APC Chairman and member of GAC, said that the move was to strengthen the unity within the party.

“Yes, it is true; all groups have been dissolved. The decision was taken this afternoon (Tuesday). You are a member of APC and nothing more.

“No more groups within the party. We are all one under the APC,” he said.

Balogun explained that influential groups within the party, such as the Justice Forum (JF) and the Mandate Group (MG) were also affected by the ban.

The party chairman, however, declined comment on whether the development had to do with any rivalry between JF, said to be controlled by the Minister of Interior, Mr Rauf Aregbesola and MG, peopled by the core loyalists of by the APC National Leader, Bola Tinubu.