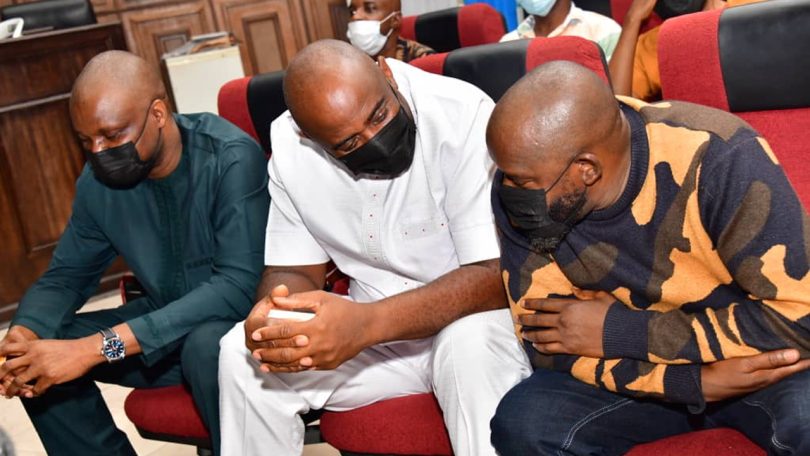 Delivering judgment, Justice Emeka Nwite, held that having admitted to committing the offence preferred against them in counts 5, 6 and 7 by the NDLEA, Umeibe and Ezenwanne, who are 6th and 7th defendants, “they are hereby convicted accordingly.”

Justice Nwite sentenced them to two years imprisonment on each of counts 5, 6 and 7.

He said the terms, which should run concurrently having been remorseful, would commence from the date the defendants were arrested by the agency.

The newsmen report that Umeibe and Ezenwanne are the two alleged drug traffickers arrested at the Akanu Ibiam International Airport in Enugu by the Inspector General of Police (IGP)’s Intelligence Response Team (IRT) led by Kyari based on their suspicious trafficking in hard drugs.

Umeibe and Ezenwanne, who conspired with some other persons (now at large), confessed to the police upon their arrest that they carried the recovered drugs through Addis-Ababa, Ehiopia International Airport on Jan. 19 to Enugu Airport.

The suspects were subsequently brought to Abuja and handed over to the NDLEA for further investigation.

They had pleaded guilty to five, six and seven counts preferred against them by the anti-narcotic agency bordering on importation of 21.35kg of cocaine into the country without lawful authority contrary to and punishable under Section 11(d) of the NDLEA Act, CAP N30 Laws of the Federation of Nigeria 2004.

The NDLEA accused the police officers, who had been on suspension pending the hearing and determination of the matter, of alleged compromise.

They were accused of tampering and dealing with part of the 21.8 kilogrammes of cocaine recovered from Umeibe and Ezenwanne.

Delivering the judgment, the judge held that the defendants should forfeit their international passports in accordance with Section 30 of the NDLEA Act, Cap M30, Laws of the Federation of Nigeria.

Nwite directed that, in line with the plea bargain agreement entered into, Umeibe and Ezenwanne would testify as witnesses in the trial of DCP Kyari and the other accused police officers.

The judge, who ordered the NDLEA to ensure their safety in any correctional centre of their choice, directed the NDLEA to constantly monitor the two defendants in prison to ensure that they do not commit any more crimes while serving the jail term.

Consequently, Nwite fixed July 18, July 19 and July 20 for trial of Kyari and the remaining defendants and for hearing of their fresh application for bail.

Newsmen earlier reported that at the resumed hearing, counsel for the NDLEA, Sunday Joseph, told Justice Nwite that two motions seeking for a plea bargain in respect of Umeibe and Ezenwanne had been filed.

Joseph, the director, the Legal and Prosecution Department of NDLEA, said the motions, dated June 13, were filed on June 14.

He prayed to the court for the motions to be taken and adopted.