… As Police arrest 3 armed robbery, 1 terrorism suspects, others in Katsina***

Operatives of the Benin Zonal Command of the Economic and Financial Crimes Commission (EFCC) have arrested 11 suspects over internet fraud at their hideout in Benin City.

Mr Wilson Uwujaren, the Head of Media and Publicity of the EFCC, said this in a statement on Thursday in Abuja.

He said the suspects were arrested on Thursday morning with Lexus RX330, Toyota Hilux, Toyota Venza, laptops and mobile phones recovered from them.

Uwujaren said the suspects had made useful statements and would be charged to court upon completion of the investigation.

The newsmen recall that  Operatives of the Enugu Zonal Command of the Commission on March 15, arrested 13 suspects over alleged internet fraud.

The suspects were arrested during a sting operation at the Nsukka and Emene axis of Enugu State following some verified intelligence by the EFCC.

In another development, the Police Command in Katsina State has arrested three persons suspected to be armed robbers, a notorious terrorist and other vandals.

SP Gambo Isah, its spokesperson said this on Thursday in Katsina while parading the suspects.

He said the command had on Sunday succeeded in arresting one Shamsu Umar, 29, of Kofar Marusa quarters.

“Umar was arrested with Mustafa Nuhu, 27, of Ambassador Quarters and Abdulsalam Sale alias ‘Nadurundu’, 29, of Sabuwar Kasuwa quarters, all in Katsina metropolis.

“The fact of the case is, on Feb. 28, the syndicate attacked the residence of one Mustafa Dalhat of Modoji quarters, where they inflicted deep machete cut injury on his head. 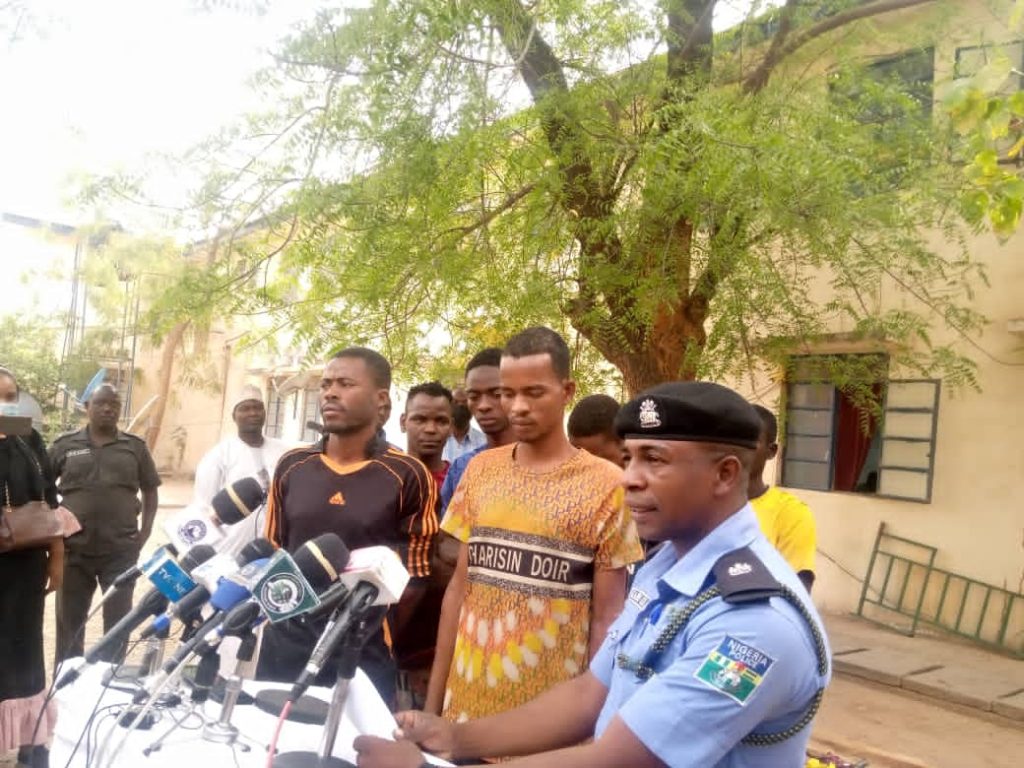 “Nemesis caught up with the syndicate when they were accosted by a team of Policemen and vigilantes after they broke into the residence of one Mrs Isma’il Bishir at Ambassador Quarters and carted away her motor vehicle.

“In the course of the investigation, the suspects confessed to the commission of the offence.

The investigation is ongoing,” he said.

Isah added that on March 7, based on credible intelligence, the command succeeded in arresting one Salisu Halilu, aged 35 of Yar Wafa village Kurfi LGA.

“He was suspected to be an informant to terrorists and bandits terrorizing Kurfi, Safana and Dutsinma LGAs, respectively.

He said, ”in the course of the investigation, the suspect confessed to the commission of the offence and further stated that he conspired with one Yellow Auta Ring Leader, Babayye, Ado Tsoho, Sannu and other gang members now at large, to rustle over 100 cows.

“He further confessed to being part of the terrorists that kidnapped one Alhaji Ibrahim Bello, where a ransom of N100,000 was given to him as his own share of the proceed of the kidnapping.

“Also on March 20, terrorists in their numbers, on motorbikes, shooting sporadically with AK 47 rifles, attacked the residence of one Sada Kotoko, aged 70, of Unguwar Fulani, Barkiya village, Kurfi LGA, kidnapped him and rustled 40 of his cows.

“Upon receipt of the report, operatives from the command responded swiftly and engaged the bandits in a fierce gun duel, rescued the kidnapped victim and recovered all the rustled animals.

“Some of the bandits escaped into the forest with bullet wounds.

The investigation is still ongoing,” the police spokesperson said.

Isah said the command had also succeeded in arresting some suspected vandals.