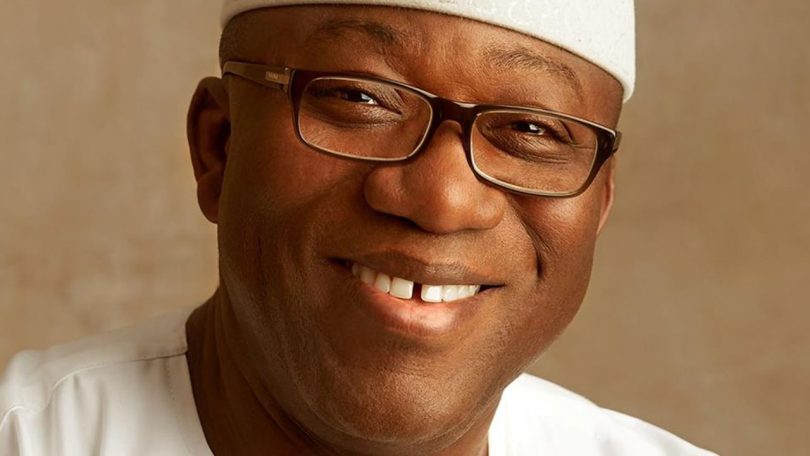 Gov. Kayode Fayemi of Ekiti has assured the people of the state that the International Airport under construction will be completed before the expiration of his tenure on Oct. 15, 2022.

The newsmen report that the project is valued at N20 billion.

Fayemi gave the assurance on Wednesday during a tour of the airport and other projects in Ado- Ekiti, the state capital.

The governor expressed delight at the level of work done at the airport, saying he is confident that the project would be delivered before he lives office.

Fayemi disclosed that the various legacy projects put in place by his administration were designed to completely change the character of the state by turning it into an economic zone.

He said the idea of the Knowledge Zone project was about using knowledge for wealth creation in the drive to turn Ekiti into a destination of choice for innovation, creativity, startup activities, a talented city for Engineers, Computer Technologists, and Agriculture Technologists, and biotechnology and medical tourism.

This, he said, was in line with the Afe Babalola multi-systems hospital.

Fayemi said the Ekiti Airport’s 3.2km runway was constructed with the capacity to accommodate all types of aircraft.

According to him, the airport will also have facilities for the Nigeria Airforce to have their own operations as well as for maintenance and associated engineering components.

“This is a routine visit again both to the Knowledge zone and the International Cargo Airport, and I am here with one of our private sector partners, the Managing Director of Axxess International, Cavista, Mr John Olajide and his team, they are collaborating with us on the private sector aspect of this.

“You’ve seen it, the runway is completely done, the terminal building is progressing and from what the project manager has just told me, they are still on course to completing this in September and just in time before we exit but whatever is left, I have no fear again.

“I know that the incoming administration would continue at pace with the vision that we’ve espoused for this.

“This is going to change the character of this state completely and its is going to make this a special economic zone that is linked to the knowledge zone, almost an Aerotropolis of all range of facilities,” he said.

Other projects visited by the governor included the Knowledge Zone, Harding Memorial College and one of the just-completed Secretariat complexes that is billed for commissioning before the end of his administration.

In another development, the European Union says all freight forwarders, air carriers, express couriers, and postal operators transporting goods to or through the European Union will be required to submit advance cargo information from March 1, 2023.

This is contained in a statement by the EU on Thursday in Lagos.

It added that the advance cargo information is set in the form of a complete Entry Summary Declaration, under the second phase of the EU’s new Customs pre-arrival security and safety programme-Import Control System II (ICS2) Release II.

The EU Import Control System II is a large-scale initiative meant to enhance Customs’ oversight of the movement of goods prior to their arrival at the EU external borders (air, maritime, land and inland waterways).

The ICS2 enables Customs authorities to identify high-risk consignments that necessitate early intervention while facilitating legitimate trade into the customs territory of the EU, Norway, and Switzerland.

The union said that economic operators involved in handling, sending, shipping and transporting cargo, express or postal consignments to or via the EU, including Norway and Switzerland, by air have to comply with new advance data reporting requirements for pre-loading and pre-arrival customs risk assessments.

This is as the EU sets to support effective risk-based Customs controls while facilitating the free flow of legitimate trade across the EU’s external borders.

According to the statement, the ICS2 will simplify the movement of goods between Customs offices at the first point of entry and final destination in the EU.

“In addition to air carriers’ ENS filing responsibilities under the multiple filing regime of Release 2, freight forwarders, express couriers, and postal operators will also be legally responsible for providing data.

”They either have to share it with the air carriers, who will then complete the ENS filing requirements, or submit the data directly to ICS2.

”Postal operators and express couriers, who have previously been declaring partial information regarding inbound shipments (under ICS2 Phase I), will now also be required to coordinate with their air carrier to submit all required data.

It added that those in the air transport sector who are currently filing advance cargo information into Import Control System will have to gradually start filing this data into ICS2 during the operational roll-out of Release II.

” Economic operators are strongly advised to prepare in advance for Release 2, in order to avoid the risk of delays and non-compliance.

” To help prepare for the introduction of ICS2 Release II, the European Commission has stated that it will make available a conformance testing environment from July 2022 until February 2023.

” To be able to verify the economic operator’s ability to access and exchange messages with Customs authorities through the intended ICS2 trader interface.

” This conformance testing is mandatory for all economic operators concerned,” it added.