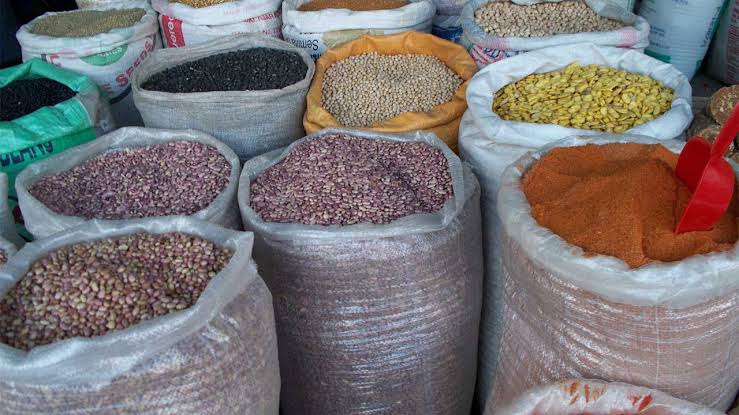 The newsmen review  activities by the Federal Government last week

The Nigerian leader gave the order for the distribution of the grains when he summoned the Minister of Agriculture and Rural Development, Alhaji Muhammed Mahmood, to the State House on April 12.

Mahmood, who spoke to State House correspondents after the closed-door meeting with the president, said he was directed to disburse the commodities to the affected people.

He expressed optimism that the exercise would also cushion the effects of high prices of grains in the market.

Buhari had also on April 12 condemned the brutal terrorist attacks in Kanam and Wase Local Government Areas of Plateau, describing the killings as heinous.

He said the perpetrators should not be allowed to escape justice.

“They should not be spared or forgiven,” he further directed in a statement issued by his spokesman, Malam Garba Shehu.

On April 13,  the president swore in commissioners of the National Population Commission (NPC) and Independent Corrupt Practices and other Related Offences Commission (ICPC).

Newsmen report that the swearing-in took place shortly before the commencement of the weekly virtual meeting Federal Executive Council (FEC) at the State House, Abuja.

The meeting of the Federal Executive Council, presided over by the president, on Wednesday, approved N1.4 billion for the supply of more equipment for the Transmission Company of Nigeria (TCN) to boost electricity supply across the country.

On April 14, the president presided over the virtual meeting of the Council of State with Vice-President Yemi Osinbajo, two former Heads of State, Yakubu Gowon and Abdulsalami Abubakar in attendance while former President Olusegun Obasanjo joined the meeting online from the U. S.

Newsmen report that the ms. council endorsed the granting of clemency, pardon and prerogative of mercy to 159 out of 162 applications presented to it for consideration.

It also endorsed April 2023 for the conduct of National Population Census.

The last population and housing census in Nigeria took place in 2006.

The total population in Nigeria was estimated at 206.14 million people in 2020, according to the latest census figures and projections from Trading Economics.

According to the NPC boss, the national census will be held after the general election, slated for February and March 2023.

In his 2022 Easter, Buhari enjoined Nigerians not to give up in the face of seemingly daunting challenges of life.

He assured that Nigeria would soon overcome its uncertainty and insecurity.

He also called on Nigerians to continue to show love to one another, rather than hate, and to also show more patriotism to the general good of society.

“Easter evokes in us the resilience of the human spirit not to give up in the face of seemingly daunting challenges of life.

The president on Thursday expressed sadness over the death of 29 persons in a tragic boat mishap in the Shagari River at Gidan Magana in the Shagari Local Government Area of Sokoto State.

He also approved the reconstitution of the Board of the Federal Mortgage Bank of Nigeria.

According to a statement issued by the President’s media aide, Malam Garba Shehu, the reconstitution of the board is with a view to repositioning the bank as a core banking institution with core competence in mortgage finance.

The president had in January, appointed Mr. Ayodeji Ariyo Gbeleyi, a Chartered Accountant and a well-known financial expert as Chairman of the Board.

The president ended the week on Thursday evening when he hosted the leadership of the nation’s judiciary, at the end of the daily fasting.

At the event, Buhari assured that the executive arm of government would continue to respect the judiciary within the boundaries laid out in the Constitution in order to strengthen the country’s democracy.