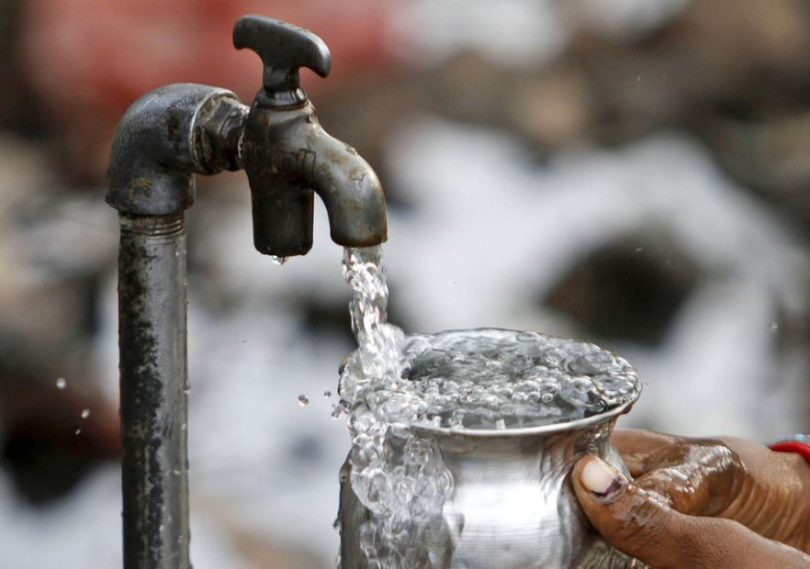 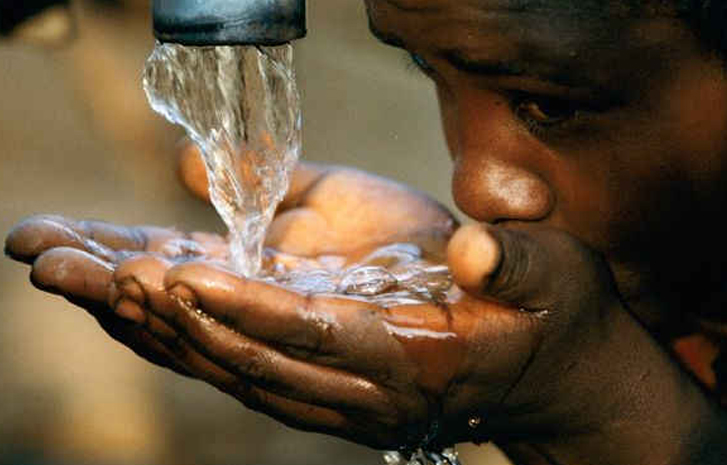 … As Kogi farmers get free fertilizer, other inputs***

The Hydrocarbon Pollution and Remediation Project (HYPREP) has called on residents of Ogoniland in Rivers to support the ongoing execution of six water projects in the area.

HYPREP’s Project Coordinator, Ferdinand Giadom, made the call in Alesa Eleme, Rivers, during his inspection tour of the water project sites on Thursday.

The Minister of Environment, Dr Mohammed Abubakar, had in March 2021 flagged-off phase one of the projects in four local government areas in Ogoniland – Eleme, Gokana, Khana and Tai.

Giadom said the Federal Government had come up with a sustainable plan to ensure the ongoing water project served the Ogoni people for decades to come.

He said: “The reason for the project’s sustainability is that it is one thing to provide water and another for the water to subsist.

“The essence of these is to look at a sustainability plan that would serve both the needs of the present generation and future generations of the Ogoni people.

“So, all hands must be on deck to install a system that will sustain the standard of portable drinking water.”

The project coordinator gave the assurance that all water facilities across the four local government areas would be of the same standard.

“We will ensure that the quality of water is up to the standard of the World Health Organisation (WHO) drinking water limit, and that will be consistent in the future.

“The future we are talking about is not five years or ten years, but maybe 20 years and far beyond that,” he added.

Also speaking, a water governance expert in the inspection team, Prof. Johnson Otu, lauded the speed of the project and called for its sustenance.

He said the team, however, noticed some technical issues that needed adjustment to ensure the water scheme met its desired target.

“We will discuss the technical issues with the contractors so that things can be put rightly in shape for the future sustainability of the project.

“Overall, HYPREP is on the right path of delivering the project for the good of the Ogoni people,” he said.

In the meantime, the federal government has begun the distribution of free farm inputs to more than 560 rural farmers in Kogi.

Speaking at the inauguration on Thursday in Lokoja, the Minister of Agriculture and Rural Development, Dr. Muhammad Abubakar, said that the gesture was to boost food security and cushion the damaging effects of the COVID-19 pandemic on rural farmers.

Represented by the National Coordinator, FGN/IFAD-VCDP, Dr Fatima Aliyu, the Minister said that the VCDP was a joint programme of the Federal Government and IFAD and is implemented by the Federal Ministry of Agriculture and Rural Development. 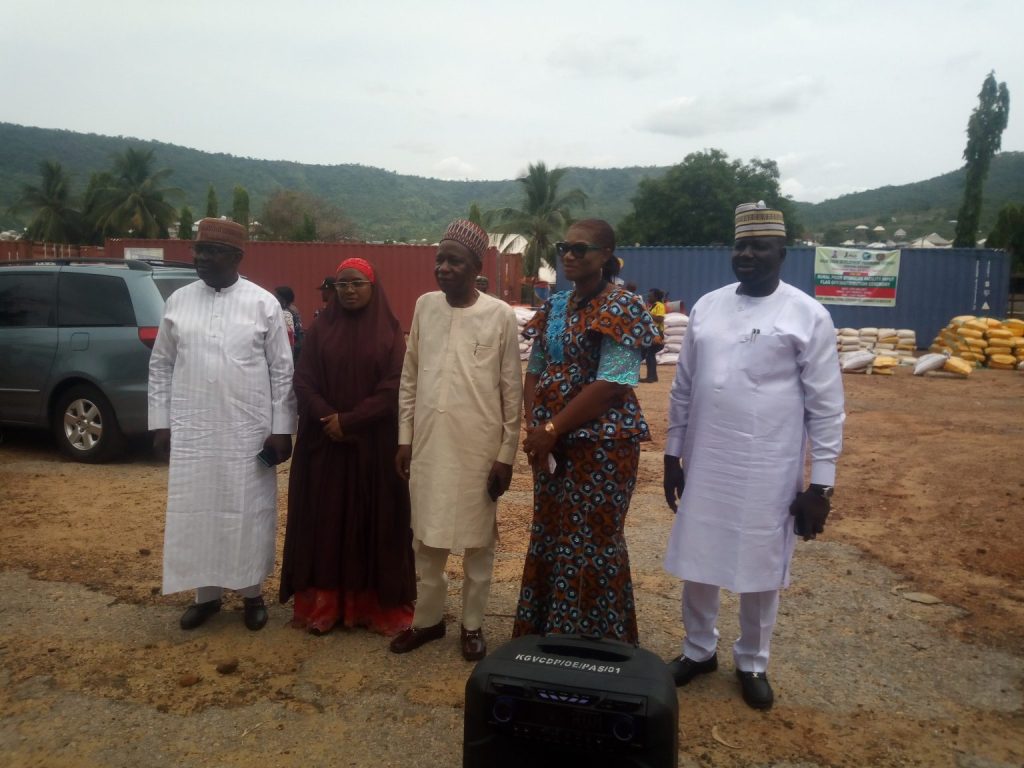 According to him, the project aims at improving the incomes and food security of poor rural households engaged in the production, processing and marketing of rice and cassava on a sustainable basis.

”In early 2020, there was an outbreak of COVID-19 pandemic which affected the world and disrupted farming activities and food systems.

”To cushion the effect of the COVID-19 pandemic on farmers, IFAD gave a grant tagged Rural Poor Stimulus Facility (RPSF) to VCDP through the Federal Ministry of Agriculture and Rural Development.

”The grant is meant for vulnerable farmers in VCDP states of Enugu State, Kogi, Nasarawa State, Anambra, Benue, Niger, Taraba and Ebonyi to sustain production and help them recover more quickly from the impact of the COVID-19 pandemic.

”Through the RPSF 2,793 vulnerable farmers will receive agro inputs to support their farming activities.

”A total of 602 farmers will receive these inputs free consisting of 40kg certified rice seeds, 2 litres of herbicides, two bags of NPK fertiliser and one bag of Urea fertilizers in Kogi state,” he said

The minister noted that VCDP would also provide extension services to targeted farmers who would receive trainings on good practices in the application of fertiliser and agro-chemicals as well as farm management and climate smart agriculture. 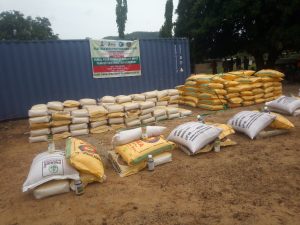 ”We recognizse and appreciate the support of IFAD in our quest to improve the livelihoods of our smallholder farmers and specifically to mitigate the effects of the COVID-19 pandemic on the agricultural sector, particularly for VCDP farmers.

”To our respected farmers, we implore you to make judicious use of the inputs.

The inputs are not meant to be sold out but for you to use them on your farms.

”We are going to support you with extension services and monitor your progress to ensure you have better yields to enhance your food security and incomes and ultimately your standard of living,” he said.

He thanked Gov. Yahaya Bello of Kogi for his commitment and support to the VCDP and assured him of their unwavering collaboration with the state to improve the livelihoods and income of the farmers.

In his remarks, the Kogi Commissioner for Agriculture, Mr David Apeh, who inaugurated the inputs’ distribution, said that government would not relent in providing a secure environment for farming activities to thrive in the state.

Earlier, the Kogi State Programme Coordinator, Dr Stella Adejoh, noted that IFAD-VCDP operations and activities which started two years ago had made positive impacts on the lives of the rural farmers.

She said that since its inception, many communities across the state were provided with rice processing centres with processors, drying slabs and solar-powered boreholes, among others.

She said that the 560 rural farmers cut across the four rice-producing local government areas of Lokoja, Ibaji, Ajaokuta and Kabba/Bunu.

She thanked the state Government.

Yahaya Bello for providing the enabling environment for the IFAD/VCDP programmes to thrive in the state.

One of the beneficiaries, Mr Salihu Abdullahi, Chairman of Magajiya farm cluster, Lokoja, commended the IFAD-VCDP for the initiative to alleviate the sufferings of rural farmers.