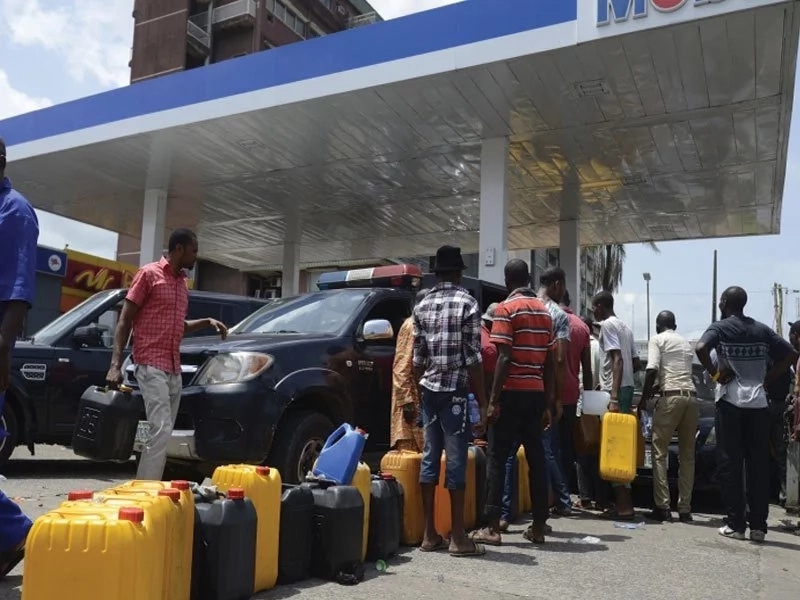 Most filling stations in Abuja have been shut down following the scarcity of Premium Motor Spirit (PMS), popularly known as petrol.

The newsmen report that the situation has caused long queues of vehicles at various filling stations in the Federal Capital Territory (FCT), Abuja.

A newsmen correspondent who monitored the petrol supply situation in Wuse, Gwarimpa, Wuye and Kubwa areas of Abuja reports that long queues had resurfaced with most fueling stations not selling to motorists.

A private car owner, Mr Alex Udoh, told newsmen that the queue resurfaced on Saturday and all his efforts to buy fuel failed.

Udoh urged the government to find a lasting solution to the lingering fuel scarcity because of its adverse effect on the national economy.

He also called on all relevant authorities to maintain peace and order in filling stations and curb black marketing spots.

“I do not know the reason for the scarcity again and it is annoying,” said the motorists.

A taxi driver, Malam Yakubu Umar, said he had been at the petrol station for over five hours waiting to buy the product.

“I bought black market yesterday and I did not make any profit,” he lamented.

None of the filling station operators responded to newsmen’s inquiries on the sudden scarcity of the product.

The Nigeria National Petroleum Company (NNPC) is also yet to explain the cause of the scarcity and efforts to restore normalcy in the industry.

This, the DG said is to enable more Nigerians to own vehicles without necessarily paying for them like it is being done in other developed climes.

The newsmen report that Aliyu disclosed this in Sokoto on Sunday when he addressed newsmen on efforts of the council to discourage the massive importation of used vehicles into Nigeria.

He said: “It is one thing to produce a vehicle and it is another thing to sell it, especially in this environment we live in Nigeria.

“We know that the purchasing power of the average Nigerian is very low.

“Around the world, people have been earning more and more relatively, but in Nigeria, the market forces have made it so that Nigerians actually earn less.

“What an average worker, at a particular grade level, let’s say in a Ministry in 1975, could buy with his salary, that same officer now is unable to do that.

“This is because of inflation and what happened to our economy, as global market forces determine the prices of vehicles, just like crude oil, gold and diamonds.”

Aliyu said that the average Nigerian has over time become unable to buy a brand new vehicle like they used to do in the 1970s and 1980s.

The DG added that in other places around the world, people get new vehicles on credit by putting in 5 or 10 per cent of their costs.

“Then you take the vehicle home and you pay over a period of 4, 5 or 6 years.

“In Nigeria, that is basically non-existent and we want to change that.

“If you want a new vehicle, you are expected to put all the money down before you drive it home.

“So, people are unable to buy these new cars,” the NADDC boss added.

Aliyu further said that the council is discussing with the Central Bank of Nigeria, Jaiz, Wema and Zenith Banks to provide a single-digit auto financing.

This, the director-general stated, is to assist Nigerians to be able to buy Made-in-Nigeria vehicles.

Aliyu said: “We are hoping to get the necessary approval so that Nigerians can just put down 10 per cent and take a brand new vehicle home and you pay the remaining debt over 4, 5 or 6 years.

“We believe this will help Nigerians to buy these vehicles and we have as part of our budget, some money for this.”