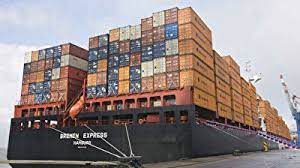 The office said the economic consequences of the war in Ukraine are beginning to leave their mark on economies.

Germany’s exports fell 3.3 per cent month-on-month in March, in contrast to the 6.2 per cent expansion seen in February.

At the same time, overall imports grew 3.4 per cent, following a 4.7 per cent rise in February, faster than economists had forecast.

As a result, the trade surplus fell to a seasonally adjusted 3.2 billion euros (3.36 billion dollars) from 11.1 billion euros in the previous month.

Destatis said that exports to Russia plunged 62.3 per cent because of the sanctions imposed as a result of Ukraine’s war against Russia.

There were further measures to restrict exports and unsanctioned behaviour of market participants.

The economic consequences of the Ukraine war and sanctions threaten to cause the German export engine to stutter this year.

In addition to direct losses in business with Russia and Ukraine, economists believe that worsening supply bottlenecks and shortages of intermediate products are likely to have a braking effect on the economy.

The Coronavirus lockdowns in China were also having a negative impact.

Year on year, export growth eased to 8.1 per cent from 14.5per cent in February.