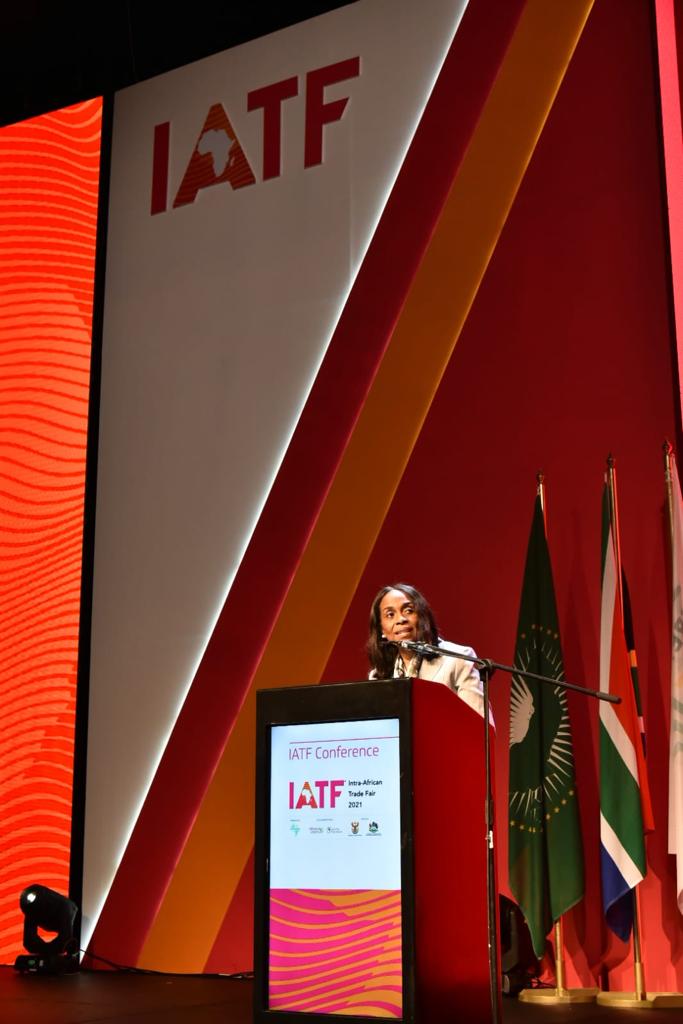 The Intra-African Trade Fair 2021 (IATF 2021) came to an end on Sunday in Durban, South Africa, recording $36 billion deals during the week-long event.

The newsmen report that the event was held physically in Durban, South Africa, while some other participants joined virtually from different parts of the world.

Speaking during the closing ceremony, Mrs Kanayo Awani, the Managing Director, Intra-African Trade Initiative in Afreximbank, said: “Let me just announce that as of now, we have $36 billion in deals concluded at IATF 2021.

“This is one of the KPIs as the trade fair is not an end in itself but the platform to develop business to grow intra-African trade and as an opportunity to do business beyond here.

“This number is as of now, deals are still going on; we advertised for digital inputs into the deals.

We circulated notes for people to fill for their deals and they are still being compiled.

According to her, a total of 11,828 attendees were at the event physically as against the targets of about 10,000 attendees.

“We had four country days – South Africa, Egypt, Cote D’Ivoire and Nigeria. 46 African countries were represented in the exhibition stands.

“In all, we had 59 countries that participated, 46 from Africa, and the rest were from outside of Africa.

“When taking into consideration the delegates, exhibitors, visitors, buyers, then speakers, there were participants in IATF 2021, activities from 128 countries.

“In terms of number of exhibitors, we had a target of 1,100 as we kept advertising and I am also happy to announce that we exceeded that.

So we had 1,161 exhibitors and this cut across the various verticals.

“As we all know, the IATF virtual was going on in parallel, so this was a hybrid programme and the statistics also showed that for the IATF virtual, we had over almost 27,000 participants.”

“There were side events even outside of this arena that was not live-streamed.

“We had a lot of media coverage as well as 1,000 pieces of daily coverage across the continent in Arabic, English, French and Portuguese.”

She commended all sponsors and participants for the success of the event and officially announced that the registration portal for the next edition, holding in Cote d’ivoire in 2023 was open.

“It is my singular honour and privilege to address you at the end of this second intra-African Trade Fair, IATF2021.

I must give credit to Prof. Benedict Oramah, President of Afreximbank.

I must also give credit to Mrs Kanayo Awani for putting the trade fair together.

“I also thank the AU Commissioner for Economic Development, Industry, Trade and Mining, Amb. Albert Muchanga, for his indefatigable effort which has helped us to where we are today.

“Similarly, not much would have been achieved without the support of the Secretary-General of the African Continental Free Trade Area (AfCTA) Secretariat, Amb. Wamkele Mene.

“Our appreciation cannot be complete without extending special thanks to our host, the Government and people of KwaZulu-Natal Province and through them, the President and Government of the Federal Republic of South Africa for the excellent hospitality we have enjoyed,” he said.