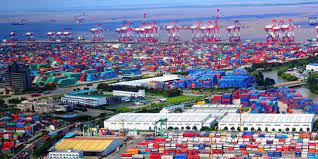 The Ibeju Palace Council of Chiefs has lent their support to the continued dredging activities by Dilly Motors Ltd, a dredging company, at the Lagasa dredging site in Ibeju Lekki.

This is contained in a resolution reached at the end of a meeting by the Onibeju of Ibeju palace and the transitional palace chiefs at Ibeju Lekki.

The resolution was signed by the High  Chief, Moshood Musefiu, the Aro of Ibeju Kingdom, and Chairman, Onibeju of the Ibeju transitional council.

The council of chiefs resolved that the Cadastre legally, with all available documentary evidence belongs to Dilly Motors Ltd.

The council resolved that Dilly Motors be allowed with immediate effect to work for at least two months to recoup part of his investment at the dredging site.

According to it, Dilly Motors should be given the freedom to accommodate another operator in addition to Auxcilia Ventures Ltd, previously accommodated only after at least two months.

“Economic activities should be allowed to resume immediately for the benefit of everybody concerned.

” Dilly Motors remains loyal to Lagasa community and should be allowed to pay his agreed loyalty and community development levy as at when due.

“Dilly Motors does not hold any bad blood against any persons as a result of what has happened in these few days.

” Dilly Motors is not the owner of the Lagasa land, only the waterside that falls within the Cadastre leased to it by the Federal Ministry of Mines and Solid Minerals.

“All existing buildings within his Cadastre will not now or later be claimed by Dilly Motors.

Dilly Motors Ltd has been involved in a face-off with the Lagasa community over its continued dredging activities at the Lagasa dredging site.

The Lagasa community had on April 21 protested the continued dredging activities of Dilly Motors at the Lagasa dredging site with various allegations levied against the company.

Prince Okwudili Umenyiora, Chairman of Dilly Motors Ltd refuted the allegations with documentary evidence that he had the consent of the ruling class to obtain his Cadastre from the Federal Ministry of Mines.

On April 25, the Federal Mines Officer, Lagos State, directed Dilly Motors to remobilise to the dredging site at Lagasa community, to resume its legal operations without fear or favour.

Series of meetings had been ongoing with a view to resolving the faceoff between the community and Dilly Motors.

This led the council of chiefs from the six ruling classes to intervene and come up with the resolutions above.