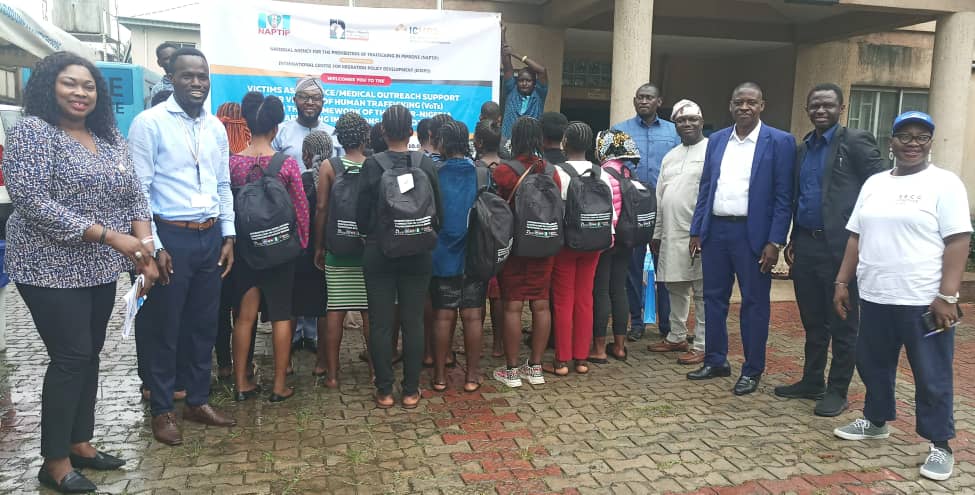 The International Centre for Migration Policy Development (ICMPD) says it extended free medical outreach to 100 victims of human trafficking to enable them live healthily and achieve their dreams.

The Head of Region of ICMPD for West Africa, Dr. Mojisola Sodeinde, said this at a Joint Capacity Building of Shelter Operators and Service Providers with Medical Outreach for 100 Human Trafficking Victims between Nigeria and Niger.

Sodeinde, who was represented by the Programme Assistant of ICMPD, Adeniyi Bakre, said they also trained no fewer than 60 women on protection of referral mechanisms for trafficking human beings.

She explained that 100 trafficking victims were able to enjoy the free medical outreach to enable them remain healthy to achieve their desires.

She said that the caregivers were trained on how to help the victims to maintain their dignity and rights to avoid being traumatised.

“The training is to ensure that the caregivers care for the victims better and allow them live a fulfilled life.

“The activities are implemented under the framework of the project: “Strengthening Niger-Nigeria Cooperation on Countering Trafficking in Human Beings” funded by the Kingdom of the Netherlands.

“ In May 2022, at the 5th in the series of the Joint Technical Working Group (JTWG) Meeting held in Lagos between the two countries, the protection and repatriation subcommittee developed a Harmonised Joint
Standard Operating Procedures.

“It was referred to as Bilateral Referral Mechanism (BRM) for Protection and Assistance to Trafficked Persons Between Niger and Nigeria,” she said.

She said that they had signed Memorandum of Understanding (MoU) and BRM between the two countries to address problems and challenges including Sexual Transmitted infections (STIs), HIV/AIDS and Pelvic
Inflammatory Disease.

She explained that other problems to be addressed included hepatitis, tuberculosis, skin infections, communicable disease; mental and psychosocial as well as health problems including nightmares, insomnia, suicidal tendencies, alcoholism, drug abuse, and addiction.

She commended the Netherlands for providing them with money to enable them get the drugs and other materials needed for the actualisation of the programme.

The ICMPD is an international organisation founded in 1993, currently with 18 European Member States and active in more than 90 countries worldwide.

ICMPD takes a regional approach in its work to create efficient cooperation and partnerships along migration routes.

Priority regions include Africa, Central and South Asia, Europe, and the Middle East. The ICMPD Headquarters is located in Vienna.

In her contributions, the Zonal Commander, National Agency for the Prohibition of Trafficking in Persons (NAPTIP), Lagos Zone, Mrs. Comfort Agboko, commended the  Netherlands Government for supporting the 100 Nigerian victims of trafficking with medical outreach and many gifts.

Agboko thanked the ICMPD for implementing the support by engaging no fewer than 60  caregivers at a two-day enlightenment and education workshop.

“We had over 100 human trafficking victims sheltered by  NAPTIP and some NGOs in Lagos who came to benefit from the free medical outreach.

“There were five doctors from Nigeria Medical Association (NMA) who examined them before giving them drugs according to their illness,” Agboko said.

The Chairman, Nigeria Medical Association (NMA), Lagos, Mr Benjamin Olowojebutu, said that NAPTIP had invited them to attend to victims of trafficking adding that they had been able to help many victims to remain healthy.

“Some of the victims we attended to are having mental stress, physical stress, emotional stress and health issues which we have come to help them to alleviate.

“There is an integration  of health  which is  commendable to bring back the victims.

“We have seen some ladies and children that are having medical issues and we have been able to solve them with the help of different medical experts such as psychiatrists, gynecologists and pharmacists,” Olowojebutu said.

He called for the need to pay attention to women adding that many of the victims had health issues of infection resulting from bad toilet habits and lack of personal hygiene.

Olowojebutu urged NAPTIP to continue the collaboration to ensure improvement in standard operating procedure of repatriation for victims to avoid mental stress.

Responding, Victim A, said she was rescued from sexual harassment adding that she was having emotional stress and appreciated ICMPD for the free drugs and counseling.

Victim B, appreciated NAPTIP and ICMPD, saying she was a domestic servant at Iyana-Ipaja but had to run away due to constant maltreatment by her boss.

She said that NAPTIP rescued and sent her to school and now, she was in SS3 about to write her WAEC.

Victim C, who traveled to Mali through human trafficking for one month and some weeks, was rescued with the help of NAPTIP.

She thanked all the organisers and the doctors who gave them medical attention.

She said she was also happy that they were given many gifts with the support of ICMPD.

Related Topics:Dr. Mojisola SodeindeInternational Centre for Migration Policy DevelopmentMrs. Comfort AgbokoNigerian National Agency for the Prohibition of Trafficking in Persons
Up Next