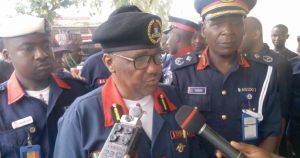 The Nigeria Security and Civil Defense Corps (NSCDC) in Bauchi State, says it has arrested two suspects for allegedly kidnapping and killing a five-year-old girl at Narabi village in Toro Local Government Area of the state.

The Commandant of the Corps, Mr Nurudeen Abdullahi, disclosed this while briefing newsmen on Monday in Bauchi.

He said that the prime suspect, Kabiru Abdullahi, allegedly kidnapped the girl in front of her house, took her to a nearby bridge, strangled her and put the body in a sack.

“On 23 April 2022 at about 1930hrs, information was received on the alleged kidnapping of a five-year-old girl (name withheld) at Sabon Gari Narabi, Toro LGA, Bauchi State.

“NSCDC officers attached to Toro Division swung into action and arrested the following suspects, Kabiru Abdullahi, 52, of Narabi Village, who is a neighbour to the deceased, and Alhaji Yawale, 45, of Rimin Zayam, Toro LGA,’’ he said

Abdullahi said that the suspects allegedly contacted the father of the victim, Mr Abdullahi Yusuf, and demanded ransom after series of negotiations.

“It was agreed that the sum of N150,000 is paid for her release, his accomplice, Alhaji Yawale collected N150,000 under a Tamarine tree in the bush at Narabi village.

“Further investigation revealed that the victim was killed on April 27, and buried inside the kitchen of the prime suspect,” he said.

The commandant further said that a team of investigators of the Corps dug the sack beneath the ground and referred the body to the General Hospital, Toro, where she was certified dead by a medical doctor.

“Investigation revealed that the victim, Hamisu Halidu, 18, of Tilden Fulani, Toro LGA, rode his Bajaj Boxer motorcycle together with the suspects to Dinya village.

“On their way, the suspects attacked the victim with a stick and knife with the intention of killing him and snatching the motorcycle.

“In the ensuing struggle; a good Samaritan came to rescue of the victim and in the process, the NSCDC team arrived and arrested the suspects,” the commandant said.

Other items recovered include a motorcycle, water pump, knife, stick, two wraps of Cannabis, cigarettes, N400 and a P-pap.

He said that the suspects would be charged to court as soon as investigations were completed.

In the meantime, the Zamfara Government has shared N10 million cash and 600 bags of rice with victims of bandits’ attack in Damri Community of Bakura Local Government Area (LGA).

The Acting Governor, Sen. Hassan Nasiha, who doubles as the Deputy Governor, said this while addressing the people of the community on Monday.

Nasiha said the government received the information about the attack with utter dismay.

He regretted that the attack took place, in spite of the commitment of the government to curtailing banditry in the state.

He advised the people to put necessary measures on the ground for self-protection, but not to initiate a threat against anybody or group.

Rather, he said, they should always be very vigilant in order to forestall the neferious activities of miscreants in their community.

He reassured them of the government’s plan to redeploy more security personnel to maintain peace in the affected community and its environs.

Speaking earlier, the Sole Administrator of the LGA, Dr Aminu Suleman, commended the government for taking urgent measures to bring some succour to the victims.

Suleman further said that there was an urgent need to redeploy more security personnel to the area, given the imminent rainy season.

According to him, the community needs peace and security to be able to embark on their farming activities this season.

In another development, Gov. Ifeanyi Okowa of Delta has called on Nigerian military authorities to prioritise the welfare of officers and men of the armed forces to motivate them in the fight against insurgency and violent crimes in the country.

The governor made the call on Monday at the 2022 Defence Retreat  “Asaba 2022” with the theme “Shaping the Armed Forces of Nigeria for Current and Future Security Challenges” held in Asaba.

He said that the armed forces might possess sophisticated weapons but that without motivation, they would not achieve the desired result. 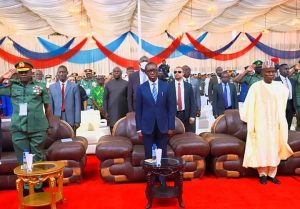 “As we try to evolve ways in tackling multifaceted security challenges in our nation, another matter requiring priority attention is the welfare of our soldiers at the front lines.

“It is my considered view that we can have all the sophisticated weaponry and excellent logistics but without motivated and satisfied personnel all our efforts will come to nought.

“It is, therefore, imperative that we place a premium on their welfare so that they will discharge their duties with utmost pride and enthusiasm.

“In the same vein, honouring soldiers who died in the battlefront is the most powerful message we can send about serving our country sacrificially.

“It has the potential to ignite the fire of patriotism in our people and become an inspiration for many others to want to wear the uniform with pride and assurance,” Okowa said.

He lauded the Chief of Defence Staff, Gen. Lucky Irabor, for his outstanding military accomplishments, describing him as “a great patriot who has made us proud in various ways through his faithful stewardship in the Nigerian Army’’.

“My dear General, I must say that your exemplary military career sends a very powerful message that hard work, dedication, patience, and loyalty are invaluable ingredients of success.

“It is my prayer that your career will end in a blaze of glory”.

The governor acknowledged and appreciated the unwavering support of the various services of the Nigerian Armed Forces towards the maintenance of peace and security in Delta State.

According to him, Delta state has enjoyed peace since its almost seven years in office, which has enabled us to implement our policies and programmes in entrepreneurship development, infrastructural renewal and education.

“We owe a world of gratitude to the armed forces, which in synergy with other security agencies, have worked to create the enabling environment for growth and development.

“This retreat is very imperative because it will always be expected of the armed forces to review their operational strategies, perceive trends, evaluate information, and consider strategy in view of emerging security threats.

“The current security challenges in the country are multifaceted, but I have no doubt in the capacity of the Nigerian Armed Forces to overcome them.

“The Nigerian Armed Forces have continued to demonstrate uncommon patriotism, dedication, sacrifice, courage, and commitment toward ensuring a safe and secure nation for us all,” he stated.

Okowa urged the Nigerian military to intensify its civil-military relations to enhance information gathering from the communities.

“In addition to developing technologically-driven security architecture for the country, the armed forces should make it a priority to proactively engage and partner with our communities.

“In spite of the difficult circumstances in which they work, and the operational hazards associated with fighting insurgency, I dare say the Armed Forces have maintained a commendable civil-military relationship.

“It is my view that deepening this relationship will procure victory faster because national security is a shared responsibility, and it is incumbent on the military hierarchy too, as much as possible, integrate communities in their plans and operational strategies.

“As we have seen in other countries where an insurgency has been contained, the locals are invaluable when it comes to intelligence gathering and logistical support.

“It is counter-productive and certainly does not augur well for the war on terror where there is distrust and suspicion between the people and the military, as has sometimes been the case.

“The asymmetrical nature of the war demands deliberate and sustained efforts to cultivate and sustain the friendship, cooperation, support, and loyalty of the people.

“They also need assurances that their identity and safety as informants will not be compromised.”

He called on Nigerians to continue to pray for men of the armed forces in the frontline and commiserated with the Chief of Defence Staff, the Nigerian Army and the families of Master Warrant Officer Audu Linus and his partner, Private Gloria Mathew who were gruesomely murdered earlier this month in Imo.

On his part, the Special Guest of Honour and Minister of Defence retired Major-Gen. Bashir Magashi, in his remarks, said that the retreat was necessary to review the operations of the military and tailor them to meet the country’s security challenges.

He said the Federal Government had invested heavily on military equipment, adding that there was still a lot to be done in spite of the successes recorded so far.

The minister urged the officers to review the armed forces laws to ensure that they were in tandem with prevailing realities.

“The Ministry of Defence will continue to provide administrative support and place a premium on defence procurements.

“We look forward to deliberations that will produce implementable solutions to the myriads of security challenges facing the nation,” Magashi said.

Earlier, Chief of Defence Staff, Gen. Irabor, in his address of welcome, said that the four-day brainstorming event by the top echelon of serving and retired military officers would help to reshape the military toward fighting future security challenges.

He said that the ultimate desire of everyone at this crucial time in our national history was to rid the country of the menace being faced in the country and to sustain public confidence in the military.

“On assumption of duty as the Chief of Defence Staff, I realised the urgent need to consolidate on the achievements of my predecessors and reinvigorate our desire to defend the territorial integrity of our nation with new ideas while strengthening cohesion within the Armed Forces and cooperation with other security agencies.

“I, therefore, needed to work within a philosophy that would “Foster a Professional Armed Forces capable of effectively meeting its constitutional imperatives.

“Delightfully, the Services keyed into this leadership philosophy and together we have continued to achieve tremendous progress.

“Undeterred by the prevailing security challenges across several regions of the country, the Armed Forces of Nigeria has continued to evolve creative ways of strengthening our potential.

“It was identified that we need to give definite and unambiguous direction to the development of our doctrines that will enable us to operate seamlessly and effectively.

“Hence, the National Military Strategy was developed to provide a platform upon which our joint and respective Services doctrines will stand,” Irabor said.

He said that the implementation of these strategies would not achieve the much-desired goals if we do not open a less theoretical means of forging ahead.

“Thus, the need to share our practical experiences and address thorny issues that bother the Defence Headquarters and the three Services, in our quest to meet the constitutional roles for the Armed Forces of Nigeria.

“The Defence retreat is thus designed to be very engaging and interactive (with no-holds-barred), in line with my desire for decision making to be a collective approach of active participation.

“This retreat, therefore, seeks to not only concentrate on the current security issues but to begin to plan and strategically pivot on how to fight the ‘Future Wars’.

“I am also quite conscious of the third objective of this Retreat, which is to boost cohesion, mutual respect and the spirit of togetherness/collectiveness in our noble profession, as battles and wars become more of joint operations,’’ he said.

Irabor commended President Muhammadu Buhari for his sterling support to the armed forces and pledged unalloyed loyalty and total commitment to ensure the security of lives and property that would endear the prosperity of the Nigerian citizenry was provided.

The high point of the event was the inauguration of the National Military Strategy.