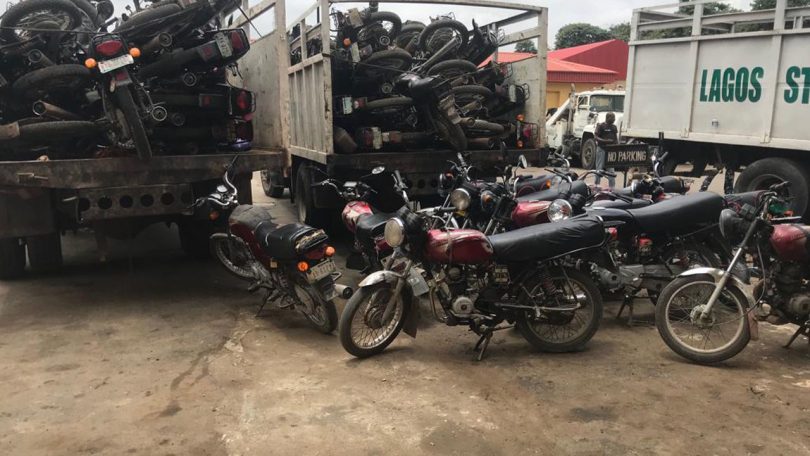 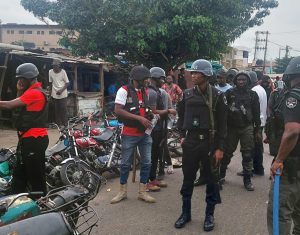 Lagos State Environmental and Special Offences (Enforcement) Unit, led by its Chairman, CSP Shola Jejeloye, during raids carried out on some commercial motorcycles in some parts of the state.

… As Police rescue 4 persons from jungle justice on Eko bridge***

The Agency’s Spokesman, Mr. Gbadeyan Abdulraheem, who confirmed the seizure in a statement issued in Lagos on Thursday, said that the operation was carried out in a week-long raid.

The newsmen report that the 250 motorcycles earlier seized by the task force for traffic offenses were crushed by the state government in June.

Abdulraheem said that the motorcycles were seized while plying the major highways across the state, six local government areas and nine local council development areas, where commercial motorcycles had been prohibited.

While describing the activities of those he called ‘recalcitrant commercial motorcyclists’ as rebellious, he maintained that the motorcycles would continue to be confiscated and crushed by the state government.

“The Lagos State Task Force has carried out numerous raids which spanned a week in various parts of the state, in order to enforce and maintain the ban on the activities of commercial motorcycles.

“The enforcement exercise, spearheaded by the Chairman of the Agency, CSP Shola Jejeloye, took place at Agege/Fagba, Apapa and Ajah, where pockets of their activities were seen.

“More raids will be carried out in the coming days, and we will ensure that we hit them in their strongholds and cripple their activities.

“No commercial bike operator violating the state’s traffic laws will be spared until total compliance is attained,” he said.

Abdulraheem reminded Lagos residents, still in the habit of patronising okada operators, to desist forthwith, in order not to be arrested and prosecuted.

According to him, both passengers and riders are culpable, if found operating on routes that have been banned by the government.

“Both the passengers and riders face a penalty of either three months jail term or N50,000 fine by the court or both, if found guilty,” he said.

The agency’s spokesman enjoined motorcycle operators to embrace alternative means of transportation, which, he said, were safer, more presentable and in line with the state government’s vision of having a top metropolitan city in the world.

In another development, the timely intervention of the police in Lagos saved four persons from being lynched by a mob on the Eko bridge.

The spokesman of the Lagos Command, SP Benjamin Hundeyin, made this known on his verified Twitter handle monitored by the newsmen.

”The timely intervention of Police from Ebute-Ero Division and Rapid Response Squad (RRS) rescue the four persons from being killed by a Mob.

He said that the four adults (including one grandmother) were beaten black and blue on Wednesday in Eko bridge.

“They were suspected of being kidnappers because they had with them in their vehicle twelve children (ranging from seven-month-old to 12 years old).

“Police officers from Ebute-Ero Division and the RRS were on time to rescue the adults from lynching.

“Their vehicle was totally burnt down by the mob.”

He said that preliminary investigation showed that they were all coming from the beach where they allegedly went to do some sacrifices.

Hundeyin said that the adults also explained that the children were their children and grandchildren.

According to him, the case has been transferred to the State Criminal Investigating Department (SCID) for further investigations.