The West African subregion on Monday told, that but for its lackadaisical disposition to policy issues of the International Maritime Organisation IMO, the zone would have long gained greater recognition and immense benefits of the international maritime community.

An IMO Chieftain and a Nigerian from Imo State, William Azuh indicated this, pleading with the Director Generals and Heads of Maritime regional leadership, for understanding, as he fingered a nonchalant attitude to issues of IMO Audit, poor disposition to training and seeming apathy, to women inclusiveness, in the vast Maritime space, as major Challenges, contrary to the vision of the international community.

He strongly urged for a turnaround, stressing that nothing would actually excite or inspire him, more than seeing his own region, thrive vibrantly, amongst the committee of Maritime nations.

A man with a deep commitment to whatever he is connected to, Mr. Azuh who started his industry wayfaring with the National Maritime Authority NMA, (now the Nigerian Maritime Administration and Safety Agency NIMASA), grieved that while nearly a hundred percent of the relevant Maritime organisations had been audited, none had seriously processed the necessary audit feedback, over five years after the strategic auditing.

“The good news, (is that) nearly a hundred percent of the maritime organisations in the region have been audited; and that is a fantastic result.

“However, actions on the Corrective Action Plan, which we call the CAP, have been very very dismal; to say the least, it’s been extremely low, and I will tell you why.

“If there is no feedback from the audits, you will then wonder why your administrations were audited in the first place”, the IMO top brass who also, officially declared the conference open said, and literally begged the assembly of maritime administrations to provide the desired feedback to the international Maritime body. 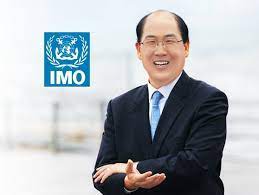 “IMO is willing and able to assist the respective countries to implement those corrective action plans, but the initiation will have to come from you.

“Now, let’s look at the outcome of the audit itself: Since the commencement of the audit in its mandatory phase, that was in January 2016; 20 African member-states were audited. I will mention the names: Those countries are; Cape-Verde,  the Congo, Democratic Republic of Congo, Cote D ‘Ivoire, Garbon, Ghana, Equitoria Guinea, Djibouti, Kenya, Sao Tome and Princippe, Madagascar, Nigeria, Senegal, Sierra-Leone, Tanzania, the Gambia, Sudan and Togo; all were audited.

“All audited member-states were provided with an Audit final report that reflected the agreed action plan to be effectively Implemented after three to four years, following the IMO recommendations.

In addition, the procedure was further simplified by ensuring that the corrective action plan model forms were sent to the member-states, to be used when communicating with the IMO.

He then expressed the IMO’s Sincere pains: that at the expiration of years devoted to the audit follow up, it was discovered that, “not (even) one, of the audited African member-states had completed, terminated or effectively implemented the agreed Action Plan!

“You see why I said the result is very dismal, and you know when you have audited, and this is more like in financial audit, the Chief Executives here, they know how they fight with the auditors, especially If the accounts are qualified, and you are expected to give feedback, and you delay; you’ll have another qualification on your hand. … So, you know what I’m talking about!”, he pointed out further.

Highlighting that the IMO had finalized 10 audit follow-up reports out of these numbers, which means that as the auditing of member states Moves into another phase, with each stage remaining strategically important, the effect of the first circle would impact the second.

“So the auditors will start the audit in the second cycle with the heritage of non-addressed findings, as the findings in the first one have not been addressed; and we are now going into the second cycle! So, the observed gaps will still be there!

“With regards to provided Corrective Action Plan, the same scenario is recorded with very low engagement or involvement of member-states in providing regular updates in the implementation of the corrective action plan.

“Only six member-states out of 20 (so far have) provided a soft form of the corrected action guide.

“Ladies and gentlemen, this is pretty serious.

I decided to deal with this matter in some detail and engage your attention of this high-level management, including the African Maritime Administration on this situation, as the importation benefits derivable from.

“With my colleagues in the member-states audit department of IMO, we have now decided to plan a dedicated high-level forum to specifically discuss the impacts and provide practical guidance, good response and find desired solutions”.

Speaking on the neglect of training, he noted that the last training conference on the issue was held in Uyo, the Akwa Ibom State capital, 10 years ago, under the supervision of former NIMASA Director-General, Mfon Ekong Usoro; and pleaded the next training should not be so elusive.

He was particularly concerned that since the beginning of the mandatory phase of the audit, not a single training for auditors had been conducted in the African region; and this was not due to IMO’s Unwillingness, but because the subregion didn’t actually make any requests in that direction.

The IMO chieftain called attention to the importance of continuity, in IMO deliberations, stressing that the international Maritime body was not too happy, that out of the 23 auditors it train, only three were ever nominated to attend IMO events.

It was like remarkably calling attention that nominations for IMO events were being treated like gratification, totally devoid of the serious business that it is.

Finally, he pleaded with the relevant African CEOs on the need for women’s inclusiveness, especially women with relevant professional backgrounds.

According to Mr. Willy Azuh, the international community is assiduously working on increasing Women’s participation and inclusiveness, and the African continent should not be left behind!

He pleaded with the attendees of the three-day conference, to show observable seriousness, in the overall interest of both the region and the countries they represented, especially so as to truly boost the African Continental influence, maritime-wise.

He lauded the Director Generals and Heads of Maritime Administration, particularly the NPA Managing Director, Mohammed Bello-Koko; Abuja MoU Boss, Sunday Umoren; the Secretary-General, MOWCA; the IMO Consultant, Mfon Ekong Usoro and the Ports State Control officers, amongst others, for ensuring that the region was protected from undue activities of substandard ships, often referred to as rusty buckets.

An attendee who spoke on condition of anonymity, expressed sincere gratitude to William Azuh, stressing that it is only a ‘Son of the Soil’ that could be so blunt, and yet be totally effective.