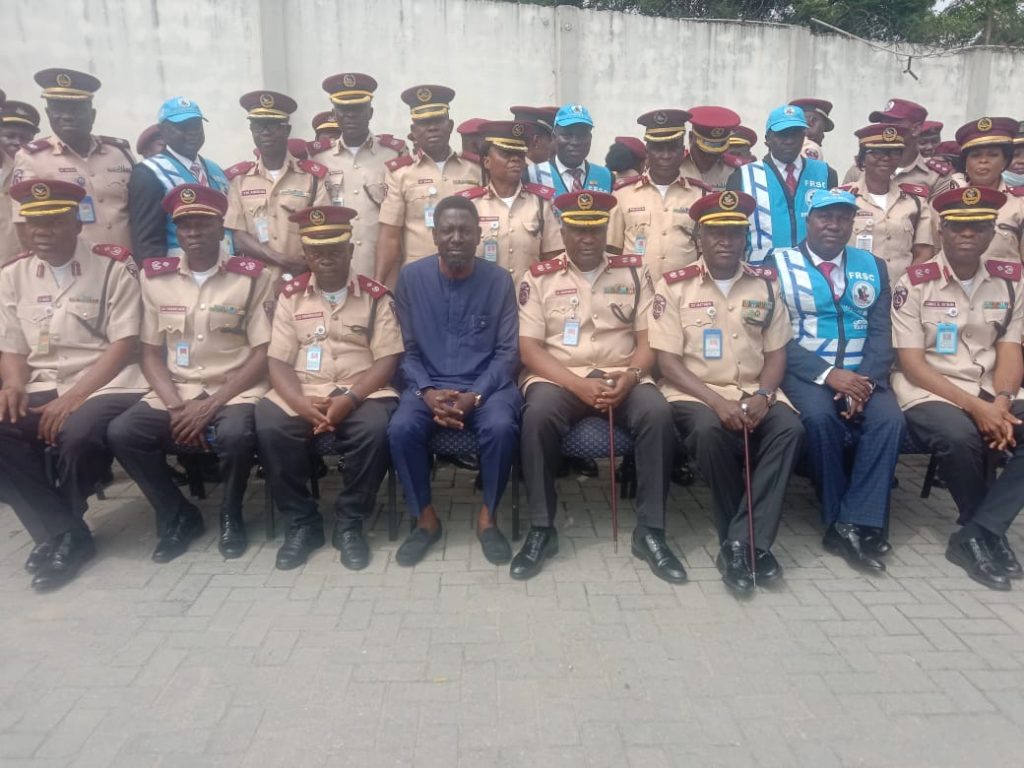 A group picture of participants and Head of units of the Lagos State Sector Command of the Federal Road Safety Corps during the 2nd Quarter Retreat Programme in Lagos on Thursday with the theme of the retreat is: Improving Productivity in Work Place Through Quality Work Ethics and Customer Delivery.

For optimum performance, improved ethics and professionalism in the course of performing their duties on the road, the Federal Road Safety Corps (FRSC), Lagos Sector Command organized a retreat for its officers.

In his address, the Lagos Sector Commander, Mr Olusegun Ogungbemide, said that their duties to humanity made the command to engage officers in the retreat to produce more committed and passionate leaders and unit heads to improve productivity to members of the public.

The Lagos Commander who spoke at the Second Quarter Retreat Programme in Lagos stated that the retreat was unique because FRSC had been given a mandate in line with the vision to reduce road crashes, eliminate traffic and create a motoring environment for Nigerians.

He said that the corps had been responsible for the safety of monitoring for the past 34 years consistently and continually improving in their disposition to members of the public.

The theme of the retreat is: Improving Productivity in Work Place Through Quality Work Ethics and Customer Delivery.

“The fact is that in the course of our activities, so many things had happened.

” So many waters have gone under the bridge that we can not authoritatively say, that the quality and the caliber that started the call are still what we have in place.

“We have reasons to interact with members of the public, where a series of complaints have been laid about the disposition of our operatives, so many petitions and attacks on from social media.

“We believe that if the essence of an establishment is to render service to members of the public, it should be a thing of concern to us,” Ogungbemide asserted.

In his speech, the Guests Speaker, Mr Olu Omojugba, explained that work ethics were sets of moral values and principles people use in their jobs.

Omojugba noted that people had a strong belief that having a strong work ethic could enhance productivity and job satisfaction, adding that developing a good work ethic is a key to success in your career and profession.

He quoted a Philosopher, Maya Angelou: “I have learned that people will forget what you did, but people will never forget how you made them feel”.

Omojugba said that FRSC officers should be able to have professional standards for relating motoring public which were their customers.

According to him,  the public had a lot of psychological characteristics and problems, adding that when officers come across such people they should be calm and get information from them in a friendly way.

Omojugba urged FRSC staff to try and minimize encounters with the motoring public.

Speaking, the Assist. Corps Commander, Mrs Emma Fakoya, said she learned from the angle of psychology such as self-psychology and psychology of customers who are the motoring public.

She averred that understanding these would help officers not to react to customers’ actions, but rather to maintain what was expected of them which was service delivery.

She said further that there was need to ensure effectively satisfied the customers in respective of their psychological situations.

Fakoya appealed to the motoring public to try and understand themselves and also asked the officers what they want them to do rather than be aggressive.

Also, Assist. Corps Commander, Mr Tunde Adesina, said that he was challenged to always carry along their subordinates, saying that there was need to assess officers before complaining about them.

He stated that he also learned how to improve on personal behaviours and caution the ways and manners to react to people’s views, saying that such attitudes would create enabling environment for the job.