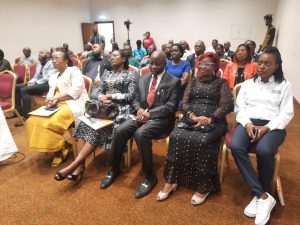 A cross-section of participants at an event hosted by Master Builders Construction Chemicals (MBCC) for Lagos State at the Real Estate Unite Summit in Victoria Island.

… As Ex-SMEDAN boss, Radda hands over to new acting D-G***

The Lagos State Government has announced that collaborative strategies were being harmonised to actualise the state’s master plan to curb gridlock and deliver a sustainable liveable city.

The newsmen report that core infrastructure ministries of the state government announced the synergy to ease gridlock and decongest the city at a forum in  Lagos.

The event was hosted by Master Builders Construction Chemicals (MBCC) for Lagos State at the Real Estate Unite Summit in Victoria Island.

The forum was for MBCC to interact with the state’s leading voices in infrastructure to get insights on the direction of present and future policies toward sustainable infrastructure.

The panel had as its title: “Sustainable Infrastructure: Regulatory frameworks and policies to create an enabling environment for sustainable infrastructure in Lagos State”.

Leading the panel discussions, the Special Adviser to Gov. Babajide Sanwo-Olu on Works and Infrastructure, Mrs Aramide Adeyoye, said the ongoing synergy was in line with the Strategic Transportation  Master Plan (STMP) of the state.

She said the plan was responsible for an ongoing massive infrastructure boost towards perfecting interconnectivity.

She hinted that plans were being fine-tuned for the take-off of construction of the proposed 38km Fourth Mainland Bridge project before the end of the year 2022.

She explained that the draft concession agreement was almost completed.

Adeyoye added that “any city that is liveable must be well planned”, adding that, no fewer than 10,000 people migrate daily to Lagos hence government must adopt measures to ensure well-being.

The Managing Director of the Lagos Metropolitan Area Authority (LAMATA), Dr Abimbola Akinajo, said that the ongoing blue and red rail line projects were in progress and with a target to be completed in 2022.

According to her, the facilities will be the operational first quarter of 2023.

She said the state was designing mass transportation buses to take between 70 to 100 passengers at a go to reduce carbon emissions to protect the environment.

She said that transport connectivity was being incorporated with housing designs that targeted people living in homes where they could work, live and play to reduce commuting.

“About 22 million trips a day and 92 per cent of them are by road and there is need to remove people from the road and put them on other modes,’’ she said.

Speaking on the ban on commercial motorcycles on some highways and bridges, she joined other panelists to appeal to residents to endure temporary discomfort for the collective progress of all residents.

Dr Idris Salako, the Commissioner for Physical Planning and Urban Development, represented by a Director, Mr. Bola Aliu, said that vertical buildings were being adopted to deal with population explosion.

He said the realisation of the master plan for various areas in the state-required research, adding that data collection was ongoing for successful implementation.

He added that Lagos had a limited land mass, adding that the human factor of flouting rules was affecting government regulation.

“We need to rethink planning,’’ he said.

In another development, Dr Dikko Radda, former Executive Director, Small and Medium Enterprises Development Agency (SMEDAN) on Wednesday in Abuja handed over the affairs of the agency to Mr Wale Fasanya.

The newsmen report that Fasanya was the Director of Policy, Planning, Monitoring and Evaluation in SMEDAN.

It would be recalled that Radda staged an upset in the All Progressives Congress (APC) governorship primary in Katsina after beating the three presumed favorites for the party’s ticket.

He commended SMEDAN staff for cordial working relationships in his six years as the Executive Director of the agency and urged them to sustain his legacies while striving to move the agency to a higher height.

According to him, I have been in SMEDAN for six years and I must commend you for all the cooperation you have given me, we were able to run the agency smoothly.

“I appreciate all the love you have shown to me if you will keep SMEDAN as high as God would allow.

“Run the agency devoid of sentiments.

The success of all of you is to leave a SMEDAN that we will all be proud of.

“ Please take high all the legacies we have put in SMEDAN.

“We all shall leave this agency someday but what is important is that we leave a very good legacy for the agency,’’ Radda said.

He said that the desire to tackle the challenges facing Katsina State inspired him to contest to govern the state.

“I know the problems facing the state and someone must go there to address them.

“I feel very encouraged that if the Governor of Borno State Babagana Zulum could do it in Borno, I think someone in Katsina should be able to do that or even more.

On his part, Fasanya said all the staff of the agency would work as a family to sustain your legacies.

“We all know that within the period you were in this agency, you were a turn-around agent and we are witnesses to it.

“We know that you are a result-oriented person and we believe you will get better results where you are going to,’’ he said.