… As NEMA tasks on sharing information with emergency responders***

The Lagos State Traffic Management Authority (LASTMA) has called for the establishment of more traffic safety advocacy clubs’ in both public and private schools.

The General Manager, LASTMA, Mr Bolaji Oreagba, made the call on Thursday during an interactive session with students of Dee-Gee Secondary School, Ebute Metta, Lagos, who paid him a courtesy visit in commemoration of his first 365 days in office.

The Director, Public Affairs Unit of LASTMA, Adebayo Taofiq, in a statement on the visit, said the establishment of more of such clubs would be a fruitful part of the efforts geared towards improving traffic management across the state.

He said that Oreagba was the Director of Operations before he was appointed as the General Manager of LASTMA by Gov. Babajide Sanwo-Olu, on Sept. 14, 2021.

Taofiq quoted Oreagba as saying that the establishment of more of such clubs in schools would go a long way in inculcating traffic safety measures in students early in life.

“These young students are definitely the future of this country, so, if you catch them young by impacting traffic knowledge in them, automatically, there would be a massive reduction in accidents on our roads in the nearest future,’’ Oreagba said.

He urged parents as well as guardians to always be good examples to children by obeying all traffic regulations and road signs whenever they are on board with them.

In attendance with the General Manager during the interactive session were senior management staff members and LASTMA Controllers.

An SSS3 student, Master Adesegun Umar, spoke on behalf of others, commending officers of LASTMA for a job well done in managing and controlling traffic across Lagos.

Umar said that they had gained additional knowledge during the interactive session with the General Manager, particularly on Zebra Crossings on roads.

In the meantime, the National Emergency Management Agency (NEMA), Abuja Operations Office, has advised Nigerians to assist in sharing correct information about disasters with emergency responders.

The meeting was organized to review the various actions of emergency responders during the recent incident of a building collapse at Kubwa in the Federal Capital Territory (FCT).

Uwazuruonye said the meeting was aimed at outlining the gaps and proffering solutions to areas that need improvement when handling future emergencies.

“We want Nigerians to help assist the victims of any disaster before emergency responders arrived at the scene. 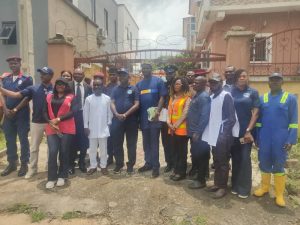 “This is because we discovered that most Nigerians are not concerned about saving the lives of the victims, they are concerned about bringing out their phones and uploading disaster situations on social media.

“Nigerians should change their attitude towards that and also they should understand that most of the emergency responders are not living within the locality.

“So they rely on the information passed across to them, and if they don’t get this information at the right time and early enough, there is no way they will respond promptly,” he said.

He said that there was a need for Nigerians to get to the police, fire service, FEMA and so on as soon as there is an emergency, as this would help operatives to know what to do.

Uwazurunoye said it was also important for Nigerians to show concern by assisting in giving the right information at the right time.

On building collapse in the FCT, he called on residents to report all suspected cases of building plan alterations to the Development Control Department.

“If you notice that a particular building is being altered and it is not safe for people to live in, please report to Development Control, so that they can take action from there.