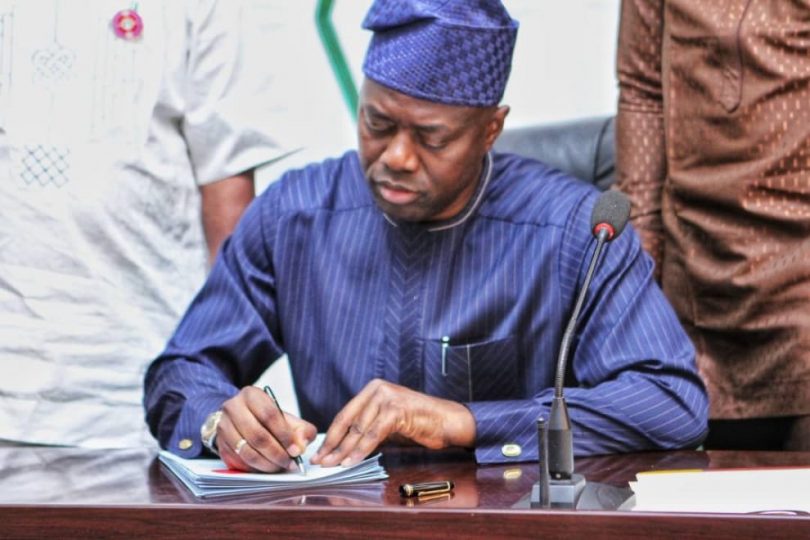 Gov. Seyi Makinde of Oyo State on Wednesday, flagged off the construction of a 76.67 kilometres Ogbomoso-Iseyin Road, reinstating the commitment of his administration toward infrastructure development across the state.

While flagging off the ceremony at Adeniran Memorial Grammar School, Ogbomoso, Makinde said his government would continue to execute road projects in its quest to continue in the work of engineering a modern Oyo State.

He said that the Ogbomoso-Iseyin Road, when completed, would be named after the former Governor of the state, the late Chief Adebayo Alao-Akala, who hailed from Ogbomoso.

According to him, development follows where roads go and we will continue to fulfill our mandate given to us by the people.

“We will not relent in all our efforts to move Oyo State to prosperity as we focus on protecting the interests of the good people of our dear state.

“Some people have come out to say we should focus on one section of the state and ensure it is developed, but this is not the path to sustainable development.

“So, here in Oyo State, we have chosen that we will develop all the zones in the state and the best way to do this is by creating an effective road network.

“And this road will facilitate both intracity and interstate movements to give way for easy access between the Ladoke Akintola University of Technology (LAUTECH) campuses in Ogbomoso and Iseyin.

“In addition, we are leveraging our comparative advantage in agriculture, because of what good is it that our farmers are producing, but cannot move their produce to the market?

“Or that our farmers have access to just local markets where only people from the same vicinity can buy.

“Whereas, they can get paid more when they are able to easily travel to larger markets, not just within the state, but also outside it,” Makinde said.

He said that his government was expanding the economy of the state through efficient road network.

The governor thanked his counterpart from Kwara, Dr AbdulRasaq AbdulRahman, who witnessed the flag off ceremony, and said that the Ogbomoso-Iseyin Road project “is of vital economic importance to both Oyo and Kwara States.

“Many people may not know, but Oyo State shares a border with Kwara State here at Ogbomoso.

“When it comes to the facilitation of trade between the two states and movement of agricultural produce, our farmers and other investors will be able to go from Iseyin, all the way to Kwara, through this route.”

In his remarks, AbdulRahman congratulated Makinde for the flag off of the 76.67 kilometres road project, saying that the project was important.

He said that road infrastructure was the right step if Nigerians truly desire growth.

According to him, if a huge percentage of our people are farmers, it is a no gain-saying that agribusiness value chains will only thrive when we connect our vast arable lands to the city centre through good roads or rail.

He said the Ogbomoso-Iseyin Road, when completed, would bring comfort to travellers and reduces travel time for the road users who want to travel further south to Abeokuta in Ogun.

AbdulRahman said that the road represents a short cut for those coming from the Northern part of Nigeria, including Kwara, who are travelling to Iseyin or to Igboora or Abeokuta.

“In all of these, you are creating huge economic values along this axis, you are also saving lives, because the ever-busy Oyo-Ogbomoso Road will be decongested,” he said.

The Kwara governor said that Makinde’s commitment to road infrastructure was similar to his administration’s strategic investments to open up the Kwara agrarian belts for economic growth.

He said that his government was constructing the first section of the 64 kilometres Kishi-Kaiama Road, which links part of Kwara to Oyo State.

“To its North-West, we are fixing the 33 kilometres Ilesha-Gwanara Road.

“Down South, we are linking the Osi-Obbo Road, where Ekiti empties into Kwara, among several other road projects connecting our hinterlands to market,” AbdulRahman said.

He promised that, as neighbours to Oyo State, Kwara would always collaborate with Makinde on all fronts to improve the lots of people.

Earlier, the Commissioner for Public Works in Oyo State, Prof. Daud Sangodoyin, said the need for construction of the road was borne out of the commitment of Makinde’s administration to improve the socioeconomic activities of the citizenry.

Sangodoyin said that the entire work scope was split into two concurrent lots on Dec. 6, 2021 for feasible delivery within 13 months.

He said that the total contract sum of the 76.67 kilometres for the new road was N43.62 billion.

In their separate remarks, representatives of the contractors handling the project, Mr Gilbert Sassine of Craneburg Construction and Mr Issam Feghali of Kopek Construction Ltd., assured the state government that quality job would be delivered.

The duo appreciated residents of Ogbomoso, Iseyin and other affected communities in the road project, for their cooperation, promising to continue engaging indigenous people in the execution of the contracts.