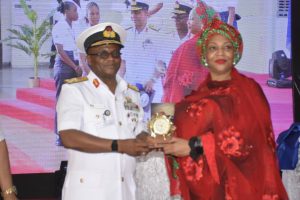 The Minister of State for Transport, Sen. Gbemisola Saraki, on Tuesday, appealed to the Nigerian Navy to include more women in hydrography to achieve the United Nations (UN) Ocean Decade.

Saraki made the appeal at the 2022 World Hydrography Day with the theme: “Hydrography: Contributing to the United Nations Ocean Decade,” which was held at the Naval Dockyard Ltd., Victoria Island, Lagos.

The minister recalled that the UN had in 2017 declared the period from 2021 to 2030, as a decade of ocean science for sustainable development.

She said that it was the first time in 28 years that there had been no attack at sea in the Gulf of Guinea; a feat recognized by the International Maritime Bureau.

“I, therefore, congratulate the Federal Government, the Federal Ministry of Transportation and the Nigerian Navy, and, of course, NIMASA on this remarkable achievement.

“It is my hope that in your pursuit of excellence, you will begin to promote and include women in hydrography daily as well.

“This will be a good project for the Hydrographer of the Nigerian Navy, which Rear Adm. Chukwuemeka Okafor is to champion,” she said.

Saraki, who was the special guest of honour, said that hydrography was both an economic and a national security issue for a nation with 853 kilometre of coastline.

“The oceans have been of immense importance both as a medium for global trade and a source of livelihood to humankind, as well as revenue generation for governments.

“As the world battles environmental pollution, there is a growing concern for the future of the ocean, particularly as it relates to the health of its biodiversity.

“In spite of these looming dangers threatening the world’s oceans, there isn’t enough effort at understanding the ocean environment to elicit appropriate actions to improve its health,” she said.

According to the minister, only about 2 per cent of the national research budget is allocated to ocean research for funding, data and understanding of the management of ocean science.

“Countries like Nigeria with enormous strategic ocean assets need the resource allocation and expertise of the Navy as a national strategy.

“It is this knowledge that enables us to better manage our ocean’s assets and deliver economic and environmental solutions to the maritime public and stakeholders across Nigeria,” she said.

“Some of these actions include the ongoing efforts to establish a National Hydrographic Agency, which will provide policy direction for synchronized hydrographic practices amongst stakeholders in the country.

“Also, the recent acquisition of a 60-meter offshore survey vessel: NNS LANA, will enable the Nigerian Navy to collect relevant information about our ocean.

“This action is already receiving the global accolade, with NNS LANA, awarded the “Best Large Research Vessel in the world for the Year 2022,” she said.

The minister said that information generated from the ongoing and future offshore surveys of Nigeria’s ocean by the Nigerian Navy would also help to achieve these maritime initiatives.

“This will go a long way to help Nigeria embrace a robust mechanism to leverage the UN Decade of Ocean Science.

“This will improve the welfare and prosperity of Nigerians and the sustainability of our maritime environment,” Saraki said.

In his remarks, the Chief Of Naval Staff (CNS),  Rear Adm. Awwal Gambo, said that the Navy had achieved another milestone in developing hydrographic capacity because its hydrographic office had commenced production of nautical publications. 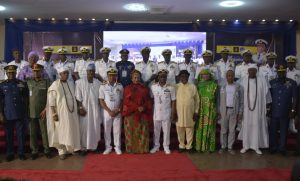 “Accordingly, two publications, namely “Symbols and Abbreviations used on Nigeria’s Paper Charts” and “Rules of the Road” were unveiled in the course of the event.

“Additionally, NNS LANA unveiled its maiden magazine; “The Gondola”, which chronicled activities from construction till date,” the CNS said.

Gambo said that these huge hydrographic capacity development efforts were coming at a time the world was focused on the use of ocean sciences to achieve sustainable development.

Also, Nigerian Hydrographer, Rear Adm. Chukwuemeka Okafor, said that it was important to provide enough awareness on the delivery of effective hydrographic service in Nigeria.

“This will in turn improve Nigeria’s economy, and the health of its citizenry, as harmful toxins, ingested through eating contaminated seafood, will be reduced to the barest minimum,” Okafor said.