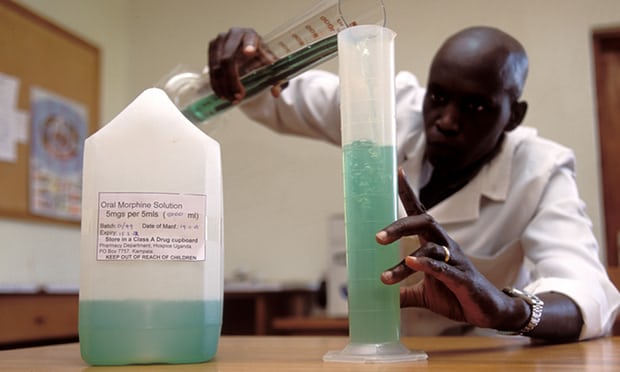 Concern over illicit use and addiction is putting morphine out of reach for millions of patients globally who need it for pain relief.

More than 25 million people, including 2.5 million children, die in agony every year around the world, for want of morphine or other palliative care, according to a major investigation.

Poor people cannot get pain relief in many countries of the world because their needs are overlooked or the authorities are so worried about the potential illicit use of addictive opioids that they will not allow their importation.

“Staring into this access abyss, one sees the depth of extreme suffering in the cruel face of poverty and inequity,” says a special report from a commission set up by the Lancet medical journal.

In Haiti, for instance, says the report, there are no nursing homes or hospices for the dying and most have to suffer without pain relief at home.

“Patients in pain from trauma or malignancy are treated with medications like ibuprofen and acetaminophen,” says testimony from Antonia P Eyssallenne of the University of Miami School of Medicine. “Moreover, nurses are uncomfortable giving high doses of narcotics even if ordered to do so for fear of being “responsible” for the patient’s death, even if the patient is terminal.

“Death in Haiti is cruel, raw, and devastatingly premature. There is often no explanation, no sympathy, and no peace, especially for the poor.”

A doctor in Kerala, India, which has a palliative care service, told of the arrival of a man in agony from lung cancer. “We put Mr S on morphine, among other things. A couple of hours later, he surveyed himself with disbelief. He had neither hoped nor conceived of the possibility that this kind of relief was possible,” said Dr M R Rajagopal.

But when he returned, morphine stocks were out. “Mr S told us with outward calm, ‘I shall come again next Wednesday. I will bring a piece of rope with me. If the tablets are still not here, I am going to hang myself from that tree’. He pointed to the window. I believed he meant what he said.”

The commission’s three-year inquiry found that nearly half of all deaths globally – 25.5 million a year – involve serious suffering for want of pain relief and palliative care. A further 35.5 million people live with chronic pain and distress. Of the 61 million total, 5.3 million are children. More than 80% of the suffering takes place in low and middle-income countries.

Jim Yong Kim, president of the World Bank, said things had to change. “Failure of health systems in poor countries is a major reason that patients need palliative care in the first place. More than 90% of these child deaths are from avoidable causes. We can and will change both these dire situations.”

Morphine is hard to obtain in some countries and virtually unobtainable in others. Mexico meets 36% of its need, China meets 16%, India 4% and Nigeria 0.2%. In some of the world’s poorest countries, such as Haiti, Afghanistan and many countries in Africa, oral morphine in palliative care is virtually non-existent.

Oral and injectable morphine is out of patent, but costs vary widely and it is cheaper in affluent countries like the USA than in poor countries. A second issue is “opiophobia” – the fear that allowing the drugs to be used in hospitals will lead to addiction and crime in the community.

“The world suffers a deplorable pain crisis: little to no access to morphine for tens of millions of adults and children in poor countries who live and die in horrendous and preventable pain,” says Professor Felicia Knaul, co-chair of the commission from the University of Miami, calling it “one of the world’s most striking injustices”.

Knaul says she only realised that many people suffered without pain relief when she was working to improve access to cancer treatment in low-income countries. “I was shocked. I had no idea. When people were showing me the data I thought it can’t be in this world,” she told the Guardian.

She had also experienced the need for morphine herself after a mastectomy for breast cancer. “When I woke up I couldn’t breathe because the pain was so bad. If they hadn’t arrived with the morphine I don’t know how I would have got through it.” And as a young girl in Mexico, she had to watch her father suffer as he died without pain relief.

The commission recommends that all countries put in place a relatively inexpensive package of effective palliative care for end of life conditions that cause suffering, including HIV, cancers, heart disease, injuries and dementia.

One of their most emphatic recommendations, says Knaul, “is that immediate-release, off-patent, morphine that can cost just pennies should be made available in both oral and injectable formulations for any patient with medical need. The disparity and access abyss between the haves and have-nots is a medical, public health and moral injustice that can be effectively addressed by the commission’s recommendations.”