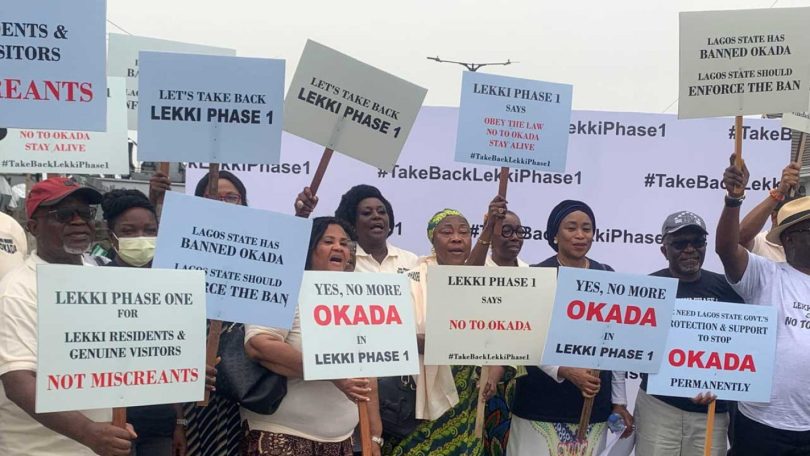 The Lekki Estate Residents and Stakeholders Association (LERSA) has asked the Lagos State Government to sustain the ban on the activities of commercial motorcycles in some parts of the state.

LERSA President, Mr James Emadoye, made the call in an interview with the newsmen in Lagos.

According to him, a monitoring exercise by the association revealed decorum and less traffic congestion along the Lekki-Epe Expressway, starting from the 1004 Residential Estate.

He said the development meant a plus for the policy and the effort of the state government to sanitise its motorways.

Emadoye also said that Nigerians should learn to do some more physical exercises, such as trekking.

He stated that though many might have to trek a few kilometres, the exercise would beneficial to the overall health and wellness of the people.

“The roads were so free today and this ban is something that the government should sustain given the pluses that the scheme had recorded so far.

“I also laud the motorcyclists for their understanding so far as the areas were free from demonstrations and the likes,“ he said.

The Lagos State Government on Wednesday began the enforcement of the ban on commercial motorcycles from operating in six LGAs and nine Local Council Development Areas (LCDAs) of the state.

In the meantime, Lekki Phase I Resident Association says it will work closely with Lagos Government and security agents to ensure that commercial motorcyclists, popularly called Okada riders, are totally banned in the area.

The association’s Chairman, Mr Yomi Idowu, stated this in an interview with the newsmen in Lagos, following the June 1 enforcement of the ban by the state government.

Newsmen report that the state government had, on May 18, announced the ban on okada riders from operating in six local government areas, including Ikeja, Surulere, Eti-Osa, Lagos Mainland, Lagos Island and Apapa.

Some Lekki residents had, on May 19, taken to the streets of Lekki Phase I to express their grievances against the menace of okada riders, while calling on the government to immediately enforce the ban.

They also reacted to an incident that occurred at the Admiralty area of Lekki, where the death of a sound engineer, identified simply as David, was, on May 12, linked to suspected motorcyclists.

A newsmen correspondent, who was in the Eti-Osa, one of the six LGAs where the ban was to be enforced, reports that no okada rider was seen in the area, except some dispatch riders.

“We are supporting the government because these are our lives.

We’ve been doing that even before the June 1 date and there are less okadas now.

“So, whatever the government brings, we can add ours so that we can all work together,’’ he said.

The chairman said that the association would soon inaugurate about 60 new buses in the area to add to the shuttle buses currently plying the road, to cushion the effect of the okada ban on passengers.

He said that awareness campaigns were also being carried out to encourage residents to use the shuttle buses provided.

“Residents are all aware of what is going on and are working together to keep the area safe for people to live in,” Idowu said.