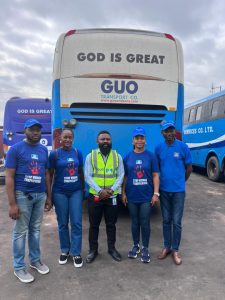 The National Agency for the Prohibition of Trafficking in Persons (NAPTIP) has again visited GUO Transport West Africa in Lagos to seek its cooperation in the fight against human trafficking.

The Deputy Director, Legal and Prosecution Department, NAPTIP, Mrs Ijeoma Amugo, at the visit on Thursday, said the campaign with transport organizations was sponsored by the Canadian Government through its consultant, Ark Group.

She emphasised that the transport line was strategic to the war because it operated within Nigeria and West Africa.

She said NAPTIP and its external partners could rescue victims and arrest suspects anywhere.

Amugo said the partnership, being the first of its type, would enlighten the transport drivers, passengers and the general public on human trafficking activities.

She added that the partnership would broaden the gap in knowledge of the company’s stakeholders on the signs to detect victims of traffickers and the perpetrators.

“The project would further impact the drivers, passengers and the public with skills to assist victims to the safety net of NAPTIP,” she said.

Amugo said a hotline and toll-free number 627 would be on the company’s buses for members of the public to reach out to NAPTIP.

“The agency has a rapid response team already positioned around to move once contacted.

” NAPTIP is ready to combat this ugly monster,” she added.

The Brand Manager for GUO Transport West Africa, Mr Bernard Nweke, said the company was customs friendly that delighted in safety and comfort travel within and outside the country.

” GUO said yes to this anti-human trafficking war and we are looking forward to the wonderful experience that would unfold from it.

” This company would embark on sensitisation Programmes for the drivers, over three million customers and the general public to enable human trafficking to lose its face in the country,” he said.

Nweke said with the new collaboration with NAPTIP, the company would intensify GUO terminal checks by its inspecting teams.

” These teams are on the road 24/7 to check on the drivers if there are contraband in the transport and trafficked persons.

“GUO company has been in existence for that past 40 years and we have been in fleet business for 16 years, ” he said.