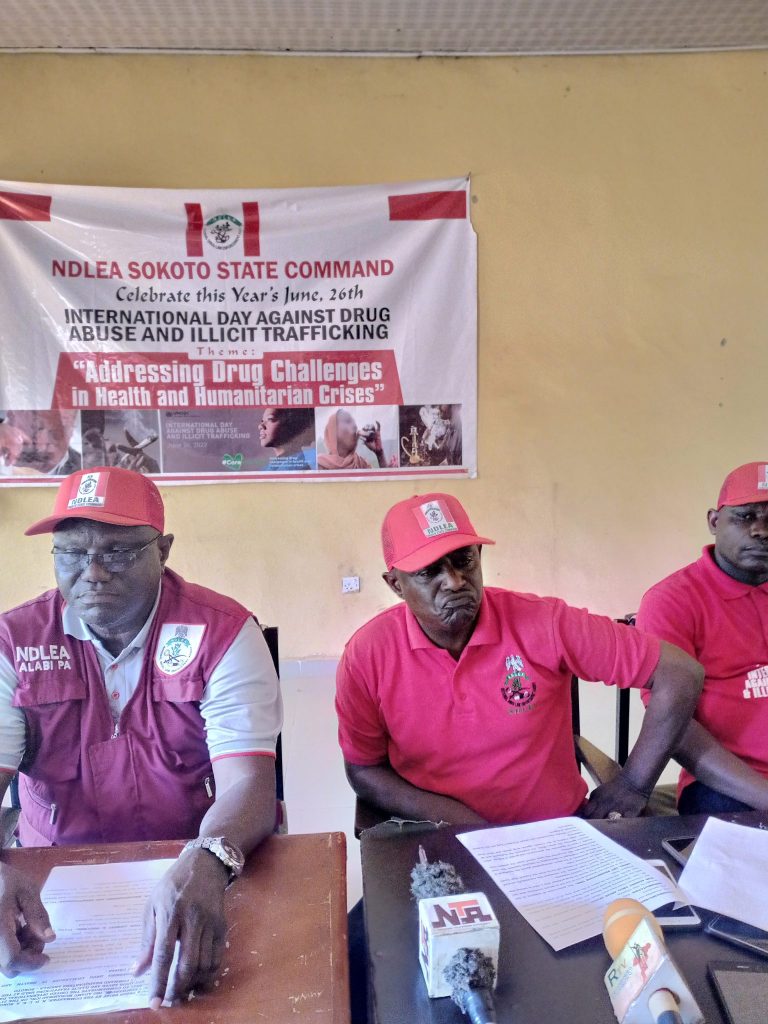 The National Drug Law Enforcement Agency (NDLEA) has arrested 78 suspects and secured 12 convictions between January and June in Sokoto State.

The NDLEA Commander in Sokoto, Mr Iro Adamu, stated this at a news conference on Tuesday in Sokoto, as part of a week-long celebration of the United Nations Day Against Drug Abuse and Trafficking.

Adamu said 103.303kg of illicit drugs and 73.759 litres of Codeine were also seized by the agency within the period.

He added that 106 drug addicts were counselled while 58 persons were rehabilitated within the year.

According to him, most of the addicts were brought to the agency by their relatives and urged families and guardians to monitor children’s associates and their whereabouts.

He said a newly-introduced drug, popularly consumed by youths was now in circulation.

The commander said the suspects were both males and females, while the seized drugs included Codeine, Methamphetamine, Exol-5, Diazepam, tramadol, Cannabis sativa, Pentazocine among others.

He described the drug abuse situation in the state as disturbing and called for collective efforts to tackle it.

“We appreciate the collaborating efforts of NGOs, traditional and religious institutions, sister security agencies and others in reducing the menace of drug abuse.

”The drug situation in Nigeria and indeed Sokoto state is disturbing, we embarked on schools sensitisation campaign on the dangers of drug abuse and other associated indiscipline.

” The implication on security, economic and the general wellbeing is dire.

He added that it had become an issue linked beyond doubt to an escalation of insecurity and its attendant effects on peace and the economy across the country.

“Drugs are mostly the catalyst for escalating vices because anywhere that there is drug, there is a crime and vice versa,” he added.

He said that the command would continue to engage in various operations, advocacy and sensitisation to solicit collective action to tackle the menace of drug abuse and trafficking.

The Commander called on the general public to cooperate with the NDLEA by providing useful information on the activities of drug traffickers and vendors.

The newsmen report that sensitization rally was conducted on Sokoto streets, as part of the 2022 International Day Against Drug Abuse and Illicit Trafficking.