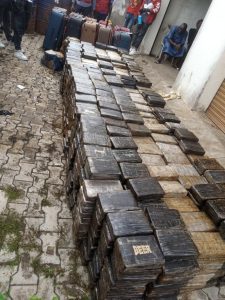 Crack seized in Lagos by the NDLEA operatives.

The National Drug Law Enforcement Agency (NDLEA) says its operatives have busted a major warehouse in a secluded estate in the Ikorodu area of Lagos State, where over N194 billion worth of crack were seized.

Its Director, of Media and Advocacy, Mr. Femi Babafemi, made this known in a statement on Monday in Abuja.

An online publication, Ark Behavioral Health Editorial Team, described Cocaine as “a powerful stimulant drug that can make you feel extremely happy and energized. Some healthcare providers use it as an anesthetic before surgery.

“In most cases, though, Cocaine is considered an illegal drug.

Babafemi said that the illicit drugs, which were 1.8 tons (1,855 kilogrammes) worth more than Two Hundred and Seventy-Eight Million, Two Hundred and Fifty Thousand Dollars ($278, 250,000).

He said that it was the equivalent of about One Hundred and Ninety-Four Billion, Seven Hundred and Seventy-Five Million (N194, 775,000,000) Naira in street value.

The NDLEA spokesperson said that the seizures appeared to be “the biggest singular Cocaine seizure in the history of Nigeria’s premier anti-narcotic agency”.

According to him, at least, four drug barons, including a Jamaican and the warehouse manager have been arrested.

“This was done in a well-coordinated and intelligence-led operation that lasted two days across different locations in Lagos State,”

“Kingpins of the Cocaine cartel in custody.

“They are all members of an international drug syndicate that the agency has been trailing since 2018,” Babafemi said.

He said that the warehouse, raided by the NDLEA operatives on Sept.18, was located in Solebo Estate, Ikorodu.

The NDLEA spokesperson said that the barons were picked from their hotels and hideouts in different parts of Lagos, between Sunday night and Monday morning.

“Preliminary investigation reveals the class ‘A’ drugs were warehoused in the residential estate, from where the cartel was trying to sell them to buyers in Europe, Asia and other parts of the world.

Babafemi quoted the NDLEA Chairman, Retired, Brig.-Gen. Buba Marwa, as commending all the officers and men of the agency involved in the extensive investigation.

This, Marwa said included those of the American Drug Enforcement Administration, (US-DEA).

He said the bust was a historical blow to the drug cartels and a strong warning.

“They will all go down if they failed to realize that the game had changed,” Marwa warned.

In the same vein, the National Drug Law Enforcement Agency (NDLEA) says it has intercepted 18 pump-action guns and 2, 300 cartridges in Kogi.

Mr Abdulkadir Abdullahi-Fakai, Kogi NDLEA Commander, announced this in Lokoja on Monday while handing over the arms and ammunition to the Kogi Police Command in the agency’s command.

Also handed over to the police were the four suspects, including a 65-year-old man, who was arrested in Abuja on Saturday, when he attempted to collect 1, 000 cartridges belonging to him from one of the suspects.

Abdullahi-Fakai said, “today, you are witnessing the handing over of four suspects, Chukwudi Adoni “M” 51-year-old (driver) and Shuaibu Gambo “M” 37-year-old (conductor) who were intercepted with 18 pump-action guns and 1, 300 cartridges on Okene-Lokoja-Abuja expressway on Sept. 17 in a bus.

“Also handed over is the 65-year-old suspect, John Ifechukwu and Anthony Agada “M” 37-year-old (conductor) who was also intercepted along the Okene-Lokoja-Abuja expressway the same day, Sept. 17 in a luxury bus conveying, 1,000 live cartridges belonging to Ifechukwu.

“You could recall that earlier in the month, One Sagir Ishaya “M” 40-year-old, a driver of a similar white bus was arrested with 12 pump-action guns and 374 cartridges, which we did hand over to the police without any delay,” he said.

The NDLEA Commander said that between July and Sept 19, the agency made some giant strides as part of the command’s determination and commitment to War Against Drug Abuse (WADA) in Kogi.

He noted that during the period, the agency seized assorted drugs totaling 561,621.78 kg and arrested 56 suspects both males and females.

According to him, the command has successfully convicted seven suspects out of 11 cases filed along with other cases still pending at Federal High Court, Lokoja.

While stating that the drug war was a fight for everyone with no exception, the commander enjoined all stakeholders to continue to support the agency all times.

“Our personnel are committed to ensuring drastic reduction to the barest minimum, the prevalence of drug abuse and trafficking in our society, more so that a drug-free society can be achieved.

“Let me conclude by thanking the Governor of Kogi, Alhaji Yahaya Bello, for the continuous support of the state government to us in the fight against drug abuse in the state,” he said.

Wilson said that the handling was the height of the expected synergy among military and paramilitary organizations to fight and checkmate crimes and criminality within the country.

He assured the Commander of the readiness of the police command under the leadership of CP Edward Egbuka, to thoroughly investigate the matters for eventual prosecution to serve as a deterrent to other criminal elements.